Home What is Engine Coolant / Antifreeze

What is Engine Coolant / Antifreeze

This guide explains ‘What is engine coolant / antifreeze, what it does, why you should use it, what type of antifreeze / coolant to use and where to put it’.


Car engines create a great deal of energy by burning petrol or diesel. Some of this energy is used to move the vehicle forward (around one third), the other two thirds of the energy produced is converted to heat. Around half of this heat goes out of the exhaust, whilst the remaining heat remains inside the engine block.

Car engines need a way of cooling down else they will continue to increase in temperature until the working metal components inside will begin to literally melt, fuse together and the engine will seize. Engine coolant is a water based liquid that absorbs the heat from the engine.

The engine coolant becomes hot itself and so is transferred to a radiator located at the front of the car. Veins in the radiator contain the hot coolant which air cools as the vehicle moves forward.

Airflow through the veins is maintained by a fan if the vehicle becomes hot due to being stationary for long periods.

A significant number of engine failures are attributed in some way to engine cooling problems. To ensure the engine is kept at an optimal running temperature, engine coolant is used. Commonly seen as a green colour as the bottle to the right suggests, engine coolant is a mixture of water and antifreeze. Engine coolant or antifreeze does in fact come in a variety of colours from green, yellow, pink, red, or orange. The colour of the engine coolant does not necessarily indicate a specific type.

Antifreeze is a combination of distilled water and a type of alcohol. Ethylene glycol, or a more recent, less hazardous additive, but far more expensive propylene glycol can also be used. Antifreeze has many benefits to the engine cooling system.

What does antifreeze do?

The chemicals in antifreeze have huge benefits, and not only in winter. As the name suggests, antifreeze prevents the coolant inside your engine from freezing under normal winter conditions. In case you’re asking ‘what temperature does antifreeze freeze, water freezes at 0° C, or 32° F. A mixture of 50% water and 50% antifreeze will freeze at around -37° C or -35° F.

Antifreeze also raises the boiling point, water boils at around 100° C, or 212° F, increasing this temperature will benefit a hot engine as boiling water can damage an engine. A 50/50 mixture of antifreeze and water will begin to boil between 240° C and 270° C (464° F and 518° F), although the exact boiling point depends on the pressure of the mixture in the engine.

An obvious question might be, can you use 100% antifreeze? water is in fact the catalyst that makes antifreeze work. 100% antifreeze actually has a much higher freezing point at around -20° C or -5° F, compared to a 50/50 mix with water.

What else does antifreeze do?

Another benefit is that a good quality antifreeze, or engine coolant that has been regularly changed prevents rust corrosion. A reputable antifreeze that has been changed based on the retailers recommended guide and has the correct mixture should provide year-round protection to:

Over time, engine coolant breaks down and becomes slightly acidic. This can in turn make the coolant becomes electrically charged. Not by much, but a current of 0.20 volts or more can begin to corrode the internal metal components of the engine. Aluminium is particularly susceptible to corrosion from electrolysis.

Difference between engine coolant and antifreeze

Coolant is the liquid that circulates around the engine and antifreeze is usually a concentrate of glycol that requires dilution before becoming the coolant. Antifreeze can however be purchased already as a diluted mixture of 50% antifreeze and 50% distilled water.

There are essentially four main types of antifreeze:

Which type of antifreeze should I use

Antifreeze manufacturers use different coloured dye to distinguish the various types of antifreeze products available. Unfortunately and rather oddly, these colours are not standardised and therefore one manufacturer can use a different colour dye to another manufacturer, even if the product is the same. This doesn’t make things particularly easy for the consumer and as a result, when choosing an antifreeze, the colour should generally not be used as a reference to the product you intend on purchasing. The added dye is beneficial however in leak detection. To correctly identify which type of antifreeze is suitable for your car:

How to check engine coolant

It’s important to check your engine coolant levels regularly, if possible weekly. The coolant system is a sealed unit that constantly circulates the coolant to maintain a safe temperature for the engine. Therefore, coolant levels should not change too much and if they do, it may suggest you have a leak. Low levels of engine coolant may cause a dashboard warning light to illuminate.

Frequent engine coolant checks may enable you to discover and deal with a leak at minimal cost compared to overheating and breaking down whilst on the road. An overheating engine can potentially gain substantial damage, even to the point it becomes economically irreparable. 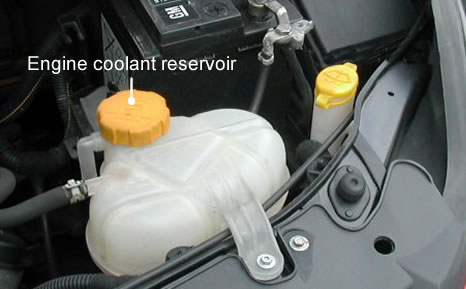 The coolant system contains a coolant expansion reservoir as pictured to the right. When temperatures increase and pressures rise in the engine, this tank allows the coolant to expand and to even be released from the engine if necessary.

The coolant reservoir allows you to check coolant levels by visually comparing the coolant level to the minimum and maximum markers on the tank. To replenish coolant levels, the cap simply needs to be unscrewed and securely fastened once levels are maintained.

Coolant can get very hot and high engine pressures can cause coolant to gush from the tank to potentially scold. The sudden release of pressure may also damage the engine. To avoid this, ensure the cap is only removed when the engine is cold. Also, when the engine is hot, coolant expands and will not give you an accurate reading.

There may be other tanks that look similar to the coolant reservoir. It’s important you correctly identify the coolant tank as adding coolant / antifreeze to other reservoirs such as the brake fluid may have dangerous consequences. Consult your vehicle owner’s manual for advice if you are unsure, or consult a car dealer or repair service garage.

How much water to add to antifreeze

A 50% mixture of water and 50% antifreeze is often the required amount. Some antifreeze containers that are purchased are a pre-mixed coolant already at 50/50. Check to ensure it is not already pre-mixed. Don’t be tempted to put a higher percentage of antifreeze, or even 100% antifreeze in your engine as this is likely to have a detrimental effect and cause damage to your engine.

Where is the engine coolant

Under the bonnet of your car, you will see reservoir tanks. It’s important to know which tank contains the engine coolant. If you struggle to locate the reservoir tank, ask a family member or friend if they can help. A car servicing / repair garage will be more than happy to help.

To give you a good idea what you’re looking for, the engine coolant tank is often located towards the front-end of the car and will usually have a coloured cap. Colours vary. The cap may simply have ‘ENGINE COOLANT’ imprinted on it, or it may have a symbol such as those shown below in the images.

Where to buy antifreeze / engine coolant

You can purchase antifreeze or pre-mixed engine coolant from the internet, or any car accessory outlet store. A good branded antifreeze may cost a little more than a unbranded version, although due to the important role of antifreeze, it may be worth purchasing a good quality brand.