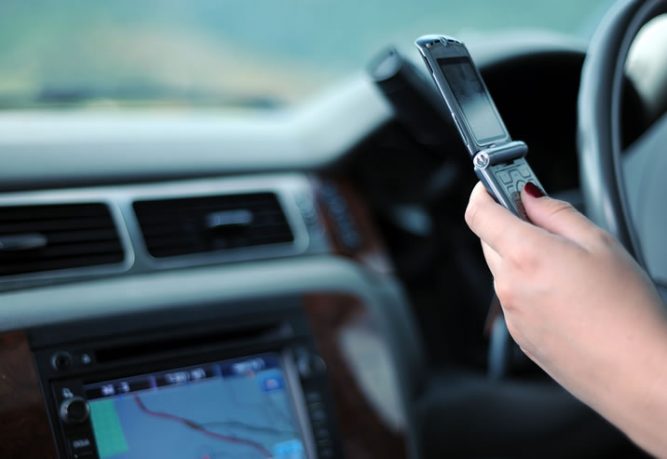 It once used to be socially ‘acceptable’ to drink and drive in the UK – even long after the drink-drive limit which was introduced in 1965.


Fast-forward to present day however, will likely see you being reported for getting behind the wheel after a few-too-many.

A similar attitude followed the ban on mobile phone use while driving in 2003. To this day, the ‘acceptable’ use of mobile phones whilst driving is still prevalent, particularly among drivers under the age of 30 (5.2 per cent).

Compare this again with mobile phone usage whilst driving. Statistics from the Home Office show that in England and Wales, 16,900 motorists were handed a fixed penalty notice (PCN) for using a mobile phone while driving in 2015, compared with 123,000 in 2011.

Though these figures represent a huge 86 per cent decrease in fixed penalty notices, there’s a rising trend for drivers using their mobile phone for texting, checking the internet, emails or social media as this represents a reduced risk of getting caught due to the phone not being visibly placed on the ear. It is estimated that figures closer to 500,000 drivers use their mobile devices daily whilst behind the wheel, with male van drivers representing the worst offenders doubling car drivers at 2.7 per cent.

Other issues may also place the true figures of offenders into dispute. Many drivers are found guilty of ‘distracted’ driving rather than the specific offence of using a mobile device whilst driving. A good proportion of these are likely linked to mobile phone usage.

Another potential cause for inaccuracies is the government police cuts. Less traffic cops will of course see a decrease in the number of PCN issued.

When accidents related to distracted driving and use of a mobile device are combined, accident statistics are not too dissimilar to those of the latest drink driving.

Also, a study commissioned by the Advanced Institute of Motorists and conducted by the Transport Research Laboratory used a simulator using 28 young people to test reaction times. These are the results:

Drivers that text will typically hold their mobile phone low to avoid being seen using the device. Clearly this will deviate the drivers attention away from the road. A long distance can be covered in just one second:

Within the first half of 2017, the law will change with fines and penalty points being doubled. Drivers caught using their mobile device while driving will face 6 penalty points on their licence and a £200 fine.

Are the Penalties Tough Enough?

Research has shown that using a mobile device at the wheel increases reaction time significantly more than the legal limit of alcohol (see table above). Take also into account the somewhat inaccurate police data on mobile phone use, are the penalties tough enough? Surely penalties should be more inline with drink driving bans?

You could argue that even tougher penalties would currently be fundamentally useless. With drivers texting and holding their device out of view, the law cannot be enforced unless there’s evidence. In the event of an accident, the police may check an individuals phone records if they suspect they were driving whilst distracted. However, the exact time of an accident is often difficult to prove and often drivers will say they made the call immediately following the accident, making it difficult to to indicative. So the government could make the laws as tough as they like, but in all likelihood, it wont stop many drivers from taking that all important quick glance to see who’s text them.

How about Apps and Headsets?

There are apps that can be installed on a device that read texts and there are hands free headsets that also read and convert voice to text messages and of course allows you to make calls. Now it’s probably safer using these methods (if they work properly) rather than looking down at your phone tapping away whilst moving at 104 feet per second. But it still equates to distracted driving. In fact as studies show, using a hands free device to talk or text is regarded as a cognitive distraction – essentially taking your mind off of driving. Studies have shown that using a hands free device makes little difference in reaction times compared to simply holding the device.

Still on the subject of apps, you can also install one that actually blocks incoming texts and calls, prevents you from using the keypad / answering the phone and can even send an automated reply. Problem here is that these apps are voluntary whether you decide to use them or not.

Can a Mobile Phone Sat-nav be used?

Using any device that diverts your attention from the road is a form of distracted driving and has potential legal issues. It really depends on how responsible you are when using it. If you want to use the satellite navigation system on your phone whilst driving, ensure you load the destination whilst not on the move and ensure the mobile phone is securely attached to the dashboard or windscreen and avoid touching the mobile device whilst on the move.

Can Anything be Done?

Mobile phones are so integrated into our lives with texting and social media. In particular young people, it’s almost become a body part in that you cannot go anywhere without it, much less, turn it off. As such, picking up the phone when a text message has been received has become an impulsive action rather than a considered decision.

The answer is actually already out there and it’s to do technology. Major mobile phone manufacturers have already developed a system integrated into mobile devices that can detect when a vehicle is in motion and disable certain features that cause distraction. The system can detect the speed you are traveling at and by use of the camera, whether you are driving or not.

None of the manufactures have implemented the system as of yet probably because they fear as being the first, it may reduce sales. Certain countries such as the USA, such technology may be tricky as some states allow the use of phones when driving, whilst other prohibit it.

In the UK however, perhaps it’s time for the government to have a more proactive approach and work towards making it compulsory for all devices bound for the UK to have this feature enabled.