Home Parents Parking Outside of Schools

Parents Parking Outside of Schools

Certain parents out on the school run appear convinced that during this specific journey, they are exempt from all road traffic laws and that getting their child to school exceeds the necessity for the consideration and safety of other road users and pedestrians. You’ll often see parents parking outside of schools on the yellow zig zag lines, on the white pedestrian crossing zig zags or parking on pavements.

Parents of primary school children are the biggest offenders. During the mid 1970’s, it was estimated that 64% of all trips to school were made by walking. This figure has significantly dropped to 44% with many more parents choosing to drive. The majority of parents that do walk live less than 1 mile from the school. However, data from school surveys show that the majority of parents that live more than 1 mile but less than 2 miles from the school will take the car.

The falling trend in walking to school is likely worsened by the increase availability of household cars and an increasing length of trips to school. Current statistics show that the average distance in miles to or from school for ages 5 to 16 is 2.4 miles.

Why is Parking Outside of Schools Dangerous?

The yellow zig zag lines directly outside of the school’s gate is often an area that children cross the road. When a driver moves off after stopping there, it can be difficult to see a small child crossing in front of your vehicle. This becomes even more apparent with modern, larger vehicles. Huge people carriers, 4×4’s and SUV’s in particular, position the driver higher up from the ground. 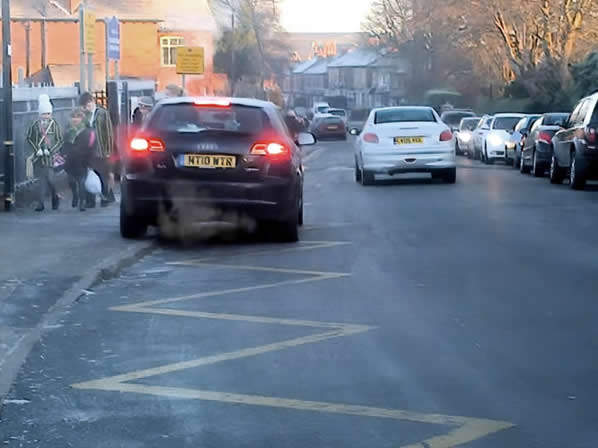 Technically it’s not illegal to park on yellow zig zag lines outside of all schools. For it to be prohibited and enforced, there must be Traffic Regulation Order that allows for a sign to be erected near the lines to clearly display the times when restrictions are in place. This allows councils to issue a Penalty Charge Notice (PCN) to offending drivers. However, if there are no cameras or Civil Enforcement Officers to issue tickets, then parents will park there regardless.

It’s not only inconsiderate and dangerous parking that’s hazardous. It’s estimated that one-quarter of traffic during rush-hour is due to the school run. 800g of CO2 is released into the air during the average drive to school and back. Add to this, parents picking up their children and waiting often leave their engine idling. An idling engine can produce up to twice as many exhaust emissions as an engine in motion. Much of this is inhaled by passing children.

Along with greenhouse gases, a range of other harmful toxins are released such as nitrogen dioxide, carbon monoxide and hydrocarbons. Increasing evidence shows the damage caused to lungs, particularly young lungs where links to asthma and other lung disease is shown.

Exhaust particulate matter, mainly associated with diesel fueled vehicles is a source of atmospheric soot and fine particles. Recent research has found that it is implicated in human cancer, heart and lung damage and mental functioning. It’s estimated that between 28,000 and 36,000 people die each year as a result of air pollution in the UK.

Dissuading Parents From Driving Their Children to School

Our excessive use of cars has been increasingly ingrained into society and to some, walking anywhere is simply unacceptable. Some parents even arrive at their school up to 45 minutes early and are prepared to wait for the school to open simply to secure parking as close to the school as possible. Based on data from school surveys, the main reason given by parents for accompanying their children to school was traffic danger – possibly some irony there.

In fairness, some parents live too far to walk and local roads maybe too dangerous to cycle. Equally, parents that live well within walking distance or do have a safe cycle route but still choose to drive.

Some schools are more motivated than others by sending out letters to parents advising them to walk or cycle to school. This is often due to complaints from local residents who have driveways blocked and road access restricted.

The school’s head master can often be seen standing outside of school gates asking parents who stop on the yellow zig zags not to stop and move on. Due to the occasional verbal abuse, head masters aren’t often keen on this method. Those less likely to receive abuse are the children, who at some schools wear hi-vis clothing and place polite notices on the windscreens of inconsiderate drivers.

Traffic cones are sometimes placed on the road outside the school by teachers and at most schools, the police occasionally patrol the area. But the one thing that all these measures have in common is that they’re all temporary and generally don’t work. It’s also not necessarily the job of a school to monitor the roads and traffic conditions.

A method that is sure to keep children safe from vehicle collision and pollution from queuing / idling cars is School Streets. School Streets is an initiative that enforces a temporary restriction to motorised vehicles on the road outside of a school. The restriction is enforced during drop-off and pick-up times and to both school traffic and through traffic.

However, this system isn’t without problems. For this system to be enforced, ANPR cameras must be setup and maintained and the cost of this is approximately £20,000 per year. Many councils are reluctant to pay this even though these costs can be significantly recovered by fines.

Along with financial issues, many councils simply do not have the power to enforce a ban on parents driving their children to the school gate. Currently there only 40 schools (0.4% of primary schools and 0.1% of secondary schools) in England that have set up School Streets.