Home Should Tractors Pull Over?

Should Tractors Pull Over? 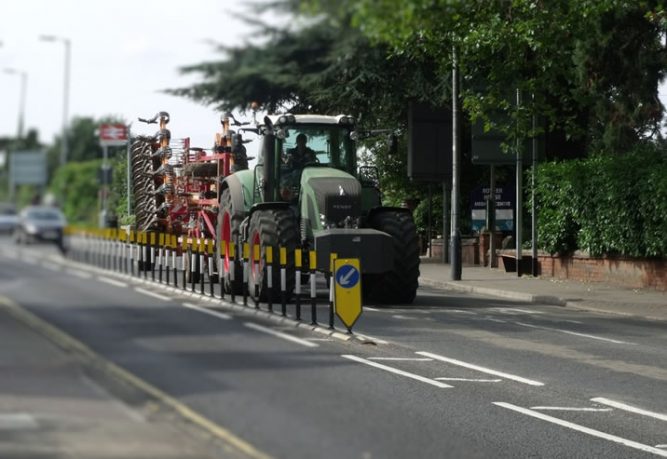 We’ve all been there; stuck in a long queue of traffic and in an attempt to diagnose the source of inconvenience, your eyes travel the length of the queue to the offending cause – a tractor.


To make things worse, it seems like we’ve passed several lay-bys where the tractor driver could have been courteous by pulling over to let everyone on their way.

Why are Tractors so Slow?

In terms of legal speed limits on public roads, tractors are not allowed to exceed 25 mph for safety reasons. Unlike the majority of the cars we drive in the UK, tractors do not need to take an annual MOT test. This means a tractors mechanical structure, braking system and tyres (among other things) are not checked by any form of authorised body.

So having a tractor, trailer and trailer contents (a combination of all weights is known as the Gross Train Weight or GTW) of anything up to 31 ton traveling at 45 mph or more in a potentially an unroadworthy vehicle, is clearly dangerous. Hence the speed limit of 25 mph.

Inevitably, tractors will cause traffic tailbacks and congestion until annual safety checks are enforced and speed limits are raised, but legally, must tractors drivers pull over to allow the flow of traffic to pass?

The Highway Code, rule 169 states ‘Do not hold up a long queue of traffic, especially if you are driving a large or slow-moving vehicle. Check your mirrors frequently, and if necessary, pull in where it is safe and let traffic pass.’

As with most of the Highway Code, rather than a specific law, this is guidance and advice recommended to be followed. Essentially, there is no specific law that dictates a tractor driver must pull over to allow traffic to pass.

Though no specific law is in force, a tractor driver causing long tailbacks can be a source of frustration for many drivers, leading them to overtake when it may not be safe to do so. If the tractor driver fails to pull over when safe to do so for a long period of time, they may be committing the offence of inconsiderate or careless driving.

Police can issue a fixed penalty which has a fine of £100 and three penalty points. Though this matter is likely to be dealt with via a fixed penalty, more serious cases of careless driving can be referred to court where the outcome can result in a driving ban and a fine of up to £5000.