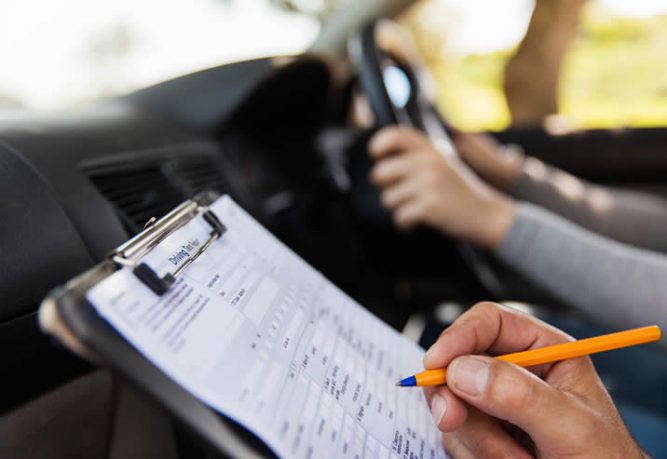 The new driving test set to begin on December 4th 2017 and will of course share many similar aspects to the current test which is covered in ‘what to expect in the driving test‘ and which will be updated when the new test officially begins.


Explained here is an update from ‘2017 driving test changes‘ where further details regarding the new test procedures have been announced and cover in greater detail how the new driving test will be explained by the examiner to the test candidate.

Start of the Driving Test

The start of the test will see the examiner briefing the test candidate on what will follow:

“The driving test will last for approximately 40 minutes and will include around 20 minutes of independent driving through varied roads and traffic conditions. I shall ask you to complete one manoeuvre and we may carry out an emergency stop.”

The emergency stop is carried out around one in every three tests conducted.

The ‘Show Me Tell Me’ Questions

Currently, the ‘show me tell me’ questions are asked before the drive at the DVSA test centre. For the new test, a ‘show me’ question will be asked whilst the test candidate is driving and can be asked at any time during the test. This can include the independent section. The examiner will choose a location and ideal time in which to ask the question so that the test candidate has sufficient time to demonstrate. Here’s two examples:

A ‘tell me’ question remains unchanged as it’ll still be asked at the test centre before the candidate begins driving. The examiner will explain the ‘show me tell me’ procedure by stating:

“Now I’d like to ask you one question about your vehicle and other matters relating to vehicle safety. The second question will be a ‘show me’ question on the move. If you’d like to make yourself comfortable in your car now please, I will join you in a moment”.

During the ‘show me’ question whilst on the move, if the test candidate isn’t sure how to do it, the examiner will choose a safe and appropriate time to pull over, and then ask them to find the control. The examiner will be able to ask any test candidates with special needs to pull in before asking the question, so they can explain what they need to do.

As with the current test, the examiner will ask the test candidate to pull over before starting independent driving. The new driving test incorporates the use of a sat nav and it’s at this point the examiner will choose the route and start it on the device. The examiner will provide the following instructions:

Out of every five tests conducted, one will not be using the sat nav, but instead the candidate will be required to follow road signs. In this situation, the examiner will provide the following instructions:

The decision to remove the turn in the road and reverse round a corner manoeuvres has been met with some degree of controversy. These manoeuvres are used daily by many drivers throughout the UK, but whilst these will no longer be tested, the DVSA state that instructors should still teach them as part of the training syllabus.

The issue is however, many learners (and their paying parents if applicable) simply want to pass the test as quickly as possible and with minimal cost, which will result in many instructors no longer teaching these manoeuvres. So the question many are asking is ‘why not simply leave the current manoeuvres as part of the test and extend on these by including the new versions?’

There’s two possibilities that the examiner will ask the test candidate to do:

And a few rules:

In order for the test candidate to drive forward into a bay, the examiner will say:

Pulling up on the Right

More controversial still is the testing procedure of pulling up on the right, reversing two car lengths and pulling out against the flow of traffic. Many instructors are not happy with the inclusion of this manoeuvre stating their concerns over safety. This is hardly surprising as even the Highway Code advises against doing so during the day, and it’s simply prohibited at night.

For obvious reasons this is one of the more hazardous manoeuvres and of which is likely to result in many test failures. It is however a legal manoeuvre within the UK (during the day) and one that the DVSA insists will make our roads safer by having the process taught correctly.

The examiner will provide instruction whilst on the move and will instruct the pupil to:

Pull up on the right when it is safe to do so, please. I’d now like you to reverse back for about 2 car lengths, keeping reasonably close to the kerb.

During the pulling up on the right manoeuvre, the test candidate is left to their own abilities in terms of observational safety. So if a car does pull up behind preventing the candidate from reversing sufficiently, the examiner should provide assistance for moving off safely if the test candidates view is obscured. See pulling up on the right for further information and tutorial.