During October 2010, the Driver and Vehicle Standards Agency (DVSA) introduced the independent driving element to the UK practical driving test.


The independent part of the driving test to enable the examiner to assess the candidates ability to drive independently, using road markings and road signs and with little input from the examiner.

With the update of the 2017 driving test changes, the independent part has now increased from 10 minutes, to 20 minutes which is around half of the entire time the test takes to conduct.

Another new addition to independent driving is the inclusion of following directions from a sat nav. This section explains what happens during the independent part of the driving test, plus tips for completing it successfully.

What is the independent driving test

From the 40 minutes duration of the practical driving test, 20 minutes are assigned for independent driving. During the drive, the examiner will ask you to park up on the left when it’s safe to do so and they will proceed to tell you that the independent driving part will begin. You can get a complete rundown on the test by reading the what to expect on the driving test guide. 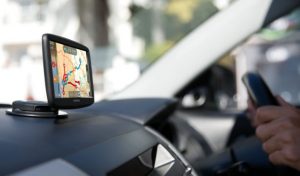 From every 5 driving tests conducted, 4 tests will involve following directions from a sat nav during independent driving. You don’t need to worry about taking along your own sat nav, or operating the built-in sat nav in your car as examiners will take their own device. The sat nav that examiners use is a TomTom Start 52, which will be mounted on a Genius flat dash-mat. The sat nav will use an in-built battery as a power source, so there’s no need for the examiner to plug in cables to your vehicle.

The test candidate will not operate the device as the examiner will setup the route on the sat nav – you’ll just need to follow directions. You’ll not be given the option to use your own sat nav device.

Alternatively, if your driving test doesn’t involve the use of a sat nav, you’ll instead be required to follow road signs for the independent driving section. Independent driving routes where road signs are to be used will be clearly visible for test candidates. However, if you cannot see a road traffic sign (this could be because it’s covered by trees for example), the examiner will provide direction until the next sign is visible.

In the case for following road signs, the examiner will state they would like you to follow the road signs to a specific location, they will then update you accordingly. If you are a little unsure of where you should be going, ask the examiner to repeat instructions.

There are no rules that you need to abide by for independent driving. In fact, you don’t even need to worry about following directions or signs correctly. Of course try your best to keep to the correct routes and directions, but the main purpose of the independent driving section is to demonstrate that you can remain safe and calm whilst driving unaided.

Whether it’s following a sat nav or road signs, the most experienced of drivers take a wrong turn sometimes. If this happens during the test, don’t stress as the sat nav will recalculate the route for you and put you back on track. If your test involves following road signs and you make a wrong turn, the examiner will assist you and put you back on route.

What should I do if I go the wrong way on a driving test?
First and foremost, remain calm. The examiner will be aware of the error and will prompt you directions to get back on route. If you are following the sat nav, the device will recalculate the route, so simply follow the directions provided. If you do become stressed and overwhelmed, explain to the examiner that you need to pull over for a moment to compose yourself. Ensure that you choose a safe, convenient and legal position (SCALP) if you do so.

An experienced local driving instructor can offer valuable practice for the independent driving section. They will know the sat nav routes and the road sign routes that the examiners use and will provide practice on both.

All DVSA examiners will use the TomTom Start 52 model sat nav during the test. This device is very adaptable and the examiner is able to change the colour, contrast and volume to ensure it is suitable for all test candidates.

The setup of the sat nav will in general be ‘default’ as it is the preferable setting used for most users, but if a test candidate needs the layout changed on the device, the instructor must contact their Local Driving Test Manager before the test to discuss personalised settings required for the test candidate. On agreement, the manager will confirm this in writing and this should be taken and shown to the examiner on the day of the test.