Home What are P Plates and When to Use Them

What are P Plates and When to Use Them

In the UK, green P plates can be used on a voluntary basis by drivers that have just passed the driving test. Unlike L-plates, it is not a legal requirement for the driver to display them on their vehicle.

What do P plates stand for?

The ‘probationary’ plates or P plates as they are commonly referred to allow other vehicles on the road to acknowledge that a driver has only just passed the practical driving test and although technically they should be up to test standard, they should be provided with extra time and space in the course of driving to allow for any mistakes made.

A young newly qualified driver is 30% more likely to have an accident compared to drivers with a year or more experience.

In certain countries, P plates are compulsory, however in England, Scotland and Wales, there is no law or legal requirement stating the compulsory use of P-plates. It is entirely the drivers decision whether they wish to use them or not.

If a driver does decide to use P plates, there is no law stating the duration in which the plates can be displayed. The driver can use them for as long as they wish and until they feel confident enough to remove them. 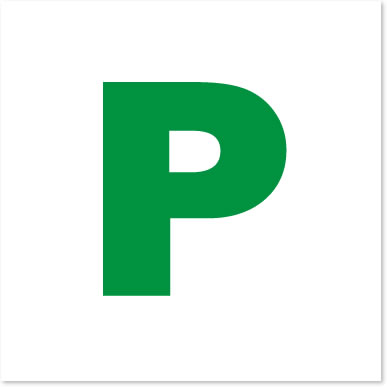 The only requirements for the use of green P plates in the UK is that a driver must have passed the UK practical driving test. They are not by law required to use them.

P plates if used, should be placed one at the front and one at the rear of the vehicle in a conspicuous location. Unlike L plates however, there are no current enforceable penalties for using the incorrect size, incorrectly placed or defaced plates.

P plates like L plates are used to inform vehicles that a driver has limited experience on the road and may be prone to making mistakes. Drivers reaction to P plates however is often quite different to those displaying L plates.

Although a driver displaying L plates will have slightly less experience than that of P plates, other vehicles know that there is likely an experienced driving instructor sitting next to them with dual controls that has ultimate control on any given situation. As a result, L plate learners often receive a pretty hard time off other vehicles impatiently trying to get past or hurry them along. Sometimes to such an extent, that many driving instructors often think it would in fact be safer not to display L plates at all.

P plate holders often receive a much more lenient attitude towards them however. As with L plate holders, they have very limited experience, but are significantly more vulnerable as they are solely in charge of the vehicle. Other drivers know this and are therefore less likely to bully them due to the possibility of pushing them into making a mistake and potentially causing an accident.

So yes, displaying P plates is a good idea and should be displayed for as long as is necessary to become a confident driver.

P plate drivers are significantly more vulnerable than learner drivers as they have very little experience and are completely left to their own devices. Pushing a P plate driver to hurry is likely to stress them and increase the potential of an accident. Upon acknowledging a P plate driver, provide them with a greater following distance and more time to react at junctions and roundabouts.