Home How to Stop Stalling a Car

How to Stop Stalling a Car

It is common for learner drivers to stall the car when either moving off or stalling when stopping the car during the driving test.

If you stall during a driving test and whether it impacts the outcome is determined by the frequency in which you stall, how you recover and how it impacts on other road users or pedestrians.

So to take a typical scenario on the driving test, a learner driver is asked to pull up on the left, when they have completed this successfully, they are asked to move off when they are ready. This tutorial offers a guide on how to stop stalling a car. 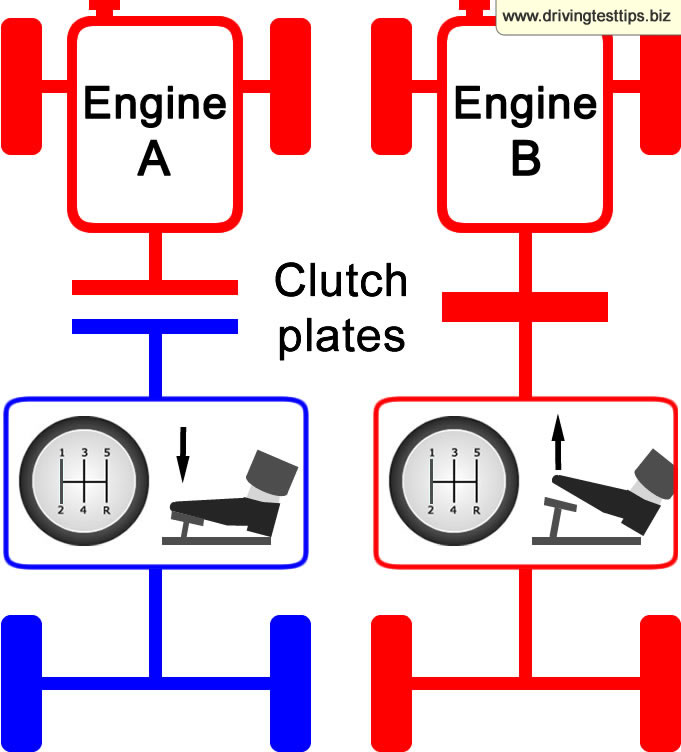 Basic diagram of how a car clutch works

When the learner tries to move off, the car stalls but has not moved any distance. This can be due to the car being in the incorrect gear, releasing the handbrake too late or being too aggressive with the clutch.

This may possibly be recorded as a single minor fault by the examiner, or it may not be recorded as any fault at all. It hasn’t affected any other road users so it’s really down to the discretion of the examiner. Stalling in this manor during the driving test isn’t likely to get you into too much trouble although excessive stalling, even if it isn’t affecting other road users may result in a fail due to lack of control of the vehicle.

A more serious example can be the learner is waiting in the middle of a crossroads for oncoming traffic to pass so as they can turn right. When all clear, they attempt to move off but stall the car. The learner flusters around and causes a potential dangerous situation for other road users. Stalling the car in this situation is much more likely to incur a serious fault.

Top Tips on How to stop stalling a car

This technique is used by some driving instructors to help prevent stalling the car when moving off. Let’s assume you are in the car, ready to go with the engine started, handbrake on and of course your seat belt on.

Although this technique is effective in preventing stalling, it is ultimately a rather cumbersome and difficult way of driving if using this technique every time you move the car off. This technique also drastically increases wear on the clutch, shortening it’s life. The above technique is excellent for a novice driver to gain an understanding of clutch control and to prevent stalling the car.

As a experienced driver however, it is really only needed if you need to move the car off from a upward gradient. Once you have mastered this technique, move on to a better technique which in the long run is easier and much easier on the clutch.

This technique is very similar to the above, but is a much more natural way of allowing the car to move off. The key is to break it down into stages and to not try it all as one movement. This technique needs practicing very slowly and breaking it down into stages until it becomes a natural and fluid process. As above, this assumes the car engine is running, handbrake and seat belt on.


How to move off quickly in a car

Stalling the car when coming to a stop

It’s important that you find the correct time to depress the clutch before stopping the car. Generally, if you are moving the car very slowly in first gear, the clutch is depressed first, followed by the brake. Anything faster, the brake must be used first, followed by the clutch. When driving normally and you need to brake to a stop, use the brake initially and depress the clutch around 3 to 4 metres from where the car will stop. This can be done in any gear and at any speed. Depressing the clutch too much later than 3 to 4 metres, especially if in a higher gear such as 5th, is likely to result in the car stalling.

Depressing the clutch too early or leaving the clutch down whilst making left or right turns is called coasting. Coasting essentially decreases the cars ability to brake. Whilst braking without the clutch depressed, the car uses the engine to help slow it down as well as the brakes. If the clutch is depressed, the engine is disengaged from the drive wheels, therefor only the brakes have an effect. Excessive coasting can be dangerous and during the driving test can lead to a failure if done excessively. Further information on coasting and the impact it has on driving and driving tests can be obtained in the What is coasting article.

Recovering from a stall

If you stall during a driving test try not to panic. The examiner simply wants to see you get going again in as little time as possible, but more importantly in a safe manor. If stalling at any time whilst the car is in first gear, there is no need to put the gear stick into neutral. Leave the car in first, ensure you keep the clutch depressed and apply the handbrake. Re-start the car and off you go. If stalling in reverse whilst manoeuvring, again leave the car in reverse, apply the handbrake to secure the car and re-start. If the car stalls in any other gear, apply the handbrake and select neutral.

The dial to the left is the car rev counter

The photo represents the dials in front of the driver in a typical car. The dial on the left is the rev counter and the dial on the right is the speedometer. Set the gas (accelerator) so it reads around 1500 rpm on the rev counter. By giving your engine power in this way before bringing the clutch up will help to prevent stalling the car.

Try these techniques in a quiet area so you will feel less stressed from other road users. The key is to taking it in stages and slowly until you build up confidence.

Good braking techniques such as progressive braking makes for safer driving, and reduces wear on braking systems and tyres. As it enables you to keep better control of the car, it can help in preventing the car from stalling.

Below are guides and tutorials related to the cars clutch that may also help with stalling the car prevention.