Every driver of a manual vehicle must slip the clutch to move off or to move very slowly such as in very slow moving traffic or when performing a slow manoeuvre such as parallel parking for example. Slipping the clutch converts some of the engine power to be lost as friction.

This friction is generated by the clutch plate and flywheel slipping and allows the vehicle to be moved at a very slow speed. This process does however cause significant wear on the clutch. Although slipping the clutch is essential and unavoidable on certain occasions, riding the clutch is avoidable and will sooner rather than later require an expensive clutch replacement. Explained are some examples of riding the clutch and how to avoid.


What is riding the clutch 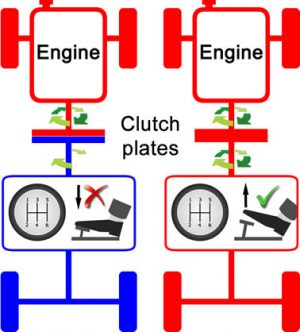 Riding the clutch is where the driver keeps the clutch pedal partially pressed down. This prevents the clutch plate from fully locking to the clutch pressure pad, therefore spinning at different speeds which results in wear on the clutch

Below provides some examples of riding the clutch.


Information related to the clutch