The lead acid batteries found in the majority of cars as with all batteries, has a limited lifespan.


Car battery life expectancy is dependent on a variety of factors although a typical lifespan is around 4 – 6 years. With today’s hectic lifestyles, a car failing to start due to a dead battery is inconvenient to say the least.

Car battery life expectancy is determined by the type of vehicle you drive, your driving habits and variable weather conditions. One of the most common reasons why vehicle recovery services get called out is due to a failing car battery.

Explained are frequent reasons for failing or dead batteries, looking out for signs of a failing battery and simple maintenance to prolong the life of your car battery.

How does a car battery work 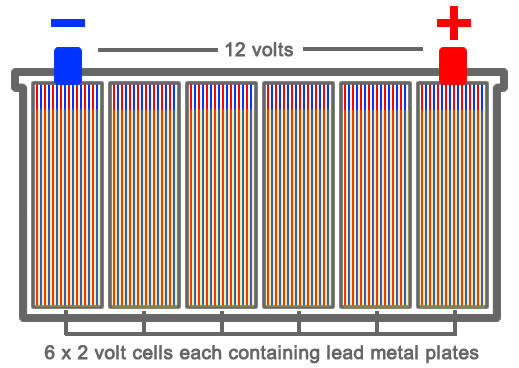 How does a car batter work

To gain a better understanding for prolonging the life of your car battery, a basic understanding on how does a car battery work may prove beneficial. The basic lead acid battery has been in use for well over 100 years and comprises of a relatively basic structure. Inside the car battery there are 6 separate compartments called cells. Each of these cells produce 2.1 volts of electricity and when all 6 are linked inside the battery, they produce 12.6 volts in total. 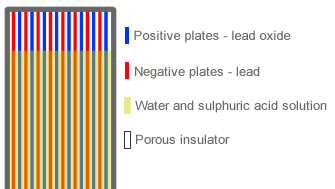 Inside of each battery cell is a solution called electrolyte which conducts electricity. Electrolyte solution is a combination of 35% sulphuric acid (H2SO4) and 65% water (H20). To prevent the negative and positive plates from touching, a porous insulator is placed between each plate to prevent the battery from shorting out if the plates were to touch and as it’s porous, it allows the electrolyte solution to flow freely between the negative and positive plates. 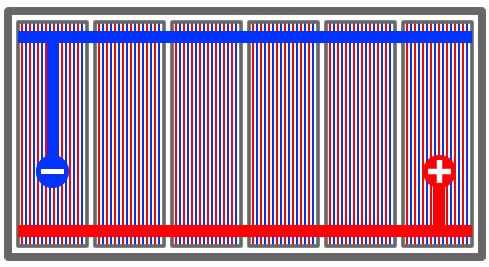 Negative and positive plates linked together

The electrons travel to the second cell where they pick up another 2.1 volts until the end cell resulting 12.6 volts. When a lead acid battery is being recharged, the opposite effect happens and the lead sulfate returns to its previous state of lead and lead oxide. These electron producing chemical reactions continue each time the battery is recharged and discharged.

If you have a dead car battery, you will either need to replace the battery yourself, call a vehicle breakdown service or attempt to push start your car ( see how to push start a car for further information). It is ideal of course to try and avoid the dreaded dead car battery before it happens.

The modern car full of its electrical accessories and auxiliary controls draws significantly more electric than those of old. Using the auxiliary electrics in your car actually not only consumes more fuel but consumes more power from the battery, and if your battery isn’t getting fully charged reasonably frequently, this will have a detrimental effect on the batteries ability to sustain high levels of power long term.

Frequent short car journeys are a major factor for the early demise in a battery’s lifespan. It actually takes around 8 hours of continuous driving for the alternator to fully charge a modern car battery. A battery that is frequently fully charged will last longer than that of a constant semi-charged state. Constant partially charged car batteries will often have half of the lifespan of a constantly fully charged battery.

Although we can’t make unnecessary long journeys just to keep the car battery in good working order, not using electric auxiliary controls unless absolutely necessary will go some way to not only saving on fuel, but to prolong the lifespan of the battery if short journeys are a factor in your daily life. If you usually only make short car journeys and it seems as though your car battery is struggling to start the car, it’s likely a sign of battery sulfation.

A very common problem is car battery drain and that it fails to hold its charge. This is often a result of sulfation. Car battery sulphation occurs when your car battery infrequently or never receives a full charge due to short journeys only. During typical use, small sulphate crystals form inside the battery which is normal. A car battery that infrequently or never receives a full charge however, these deposits build a strong crystalline deposit onto the negative plates.

Depending on the severity of the build-up and prolonged charge deprivation, the sulphation will prevent the battery from charging effectively and will require replacement. If under normal circumstances you are experiencing car battery drain, or if your car has been standing for a long period of time and the battery is dead, this is likely due to sulfation.

As reactions in lead acid batteries are chemical based, colder temperatures cause the chemical reactions to proceed at a slower rate, therefore less electrons are produced. An already weakened battery has a higher chance of dying in colder weather. Keeping your car in a garage if possible should keep the car battery warmer and will therefore allow it to function more efficiently than in cold weather.

Valve-regulated lead acid car battery
Valve-regulated lead acid car batteries (VRLA) are pre-sealed maintenance-free and contain pressure valve regulating system that allows a build-up of pressure inside the battery to escape. VRLA batteries contain a gel substance instead of the basic water/acid solution and are capable of self-producing water to retain moisture within the battery. The VRLA car battery was developed much later in the 1970’s.

Lithium-Ion car batteries
Lithium-ion batteries are typically used in consumer electronics. Not nearly as common as the acid lead type of car battery, lithium-ion is a newer technology that began use in the 1990’s. Lithium-ion car batteries can be used in high performance cars where weight is a factor as they are much lighter tan lead acid batteries. They can also be mounted in any position due to them not containing fluids. Lithium-ion batteries provide a much higher power density so can be developed much smaller in size than that of lead acid. They are also much friendlier on the environment.

Keeping a car battery constantly fully charged will allow your battery to provide more continuous efficient energy and have a longer lifespan. Apart from consistently allowing a car battery to be only partially charged by driving short infrequent journeys, the other main reason for battery damage or failure is due to charging techniques. Gel car batteries can be susceptible to damage whilst charging. If you are unsure of the exact specifications of the car battery you wish to charge, ensure the charger is suitable for 12V automotive lead acid & deep cycle leisure batteries including gel type.

Unless absolutely necessary, avoid fast battery charging and opt for the slow method. The hotter the battery gets whilst charging, the more potential damage sustained and the higher the safety risk involved due to the greater release of hydrogen gas build and release – all of which is a factor in fast charging. Fast charging also increasing the potential to overcharge which also damages car batteries. Slow charging avoids many of this dangerous and damaging issues, uses around 2 amps and takes around 10 – 15 hours.

Fast charging can charge a battery in around 1 hour. If fast charging your battery is your only option, take safety precautions. If it’s a lead acid non-maintenance-free and has vent caps on top, remove the caps and rest on top of the access tubes to allow for the release of gasses that are produced at a higher rate than slow charging. Ensure there is good air-flow in the environment to aid in dispersion of gas and avoid the use of any flames, sparks and use of electrical equipment.

Ensure that the battery charger is of a reputable manufacturer and is automatic so that it turns off or to a trickle charge once charging is complete. Also whilst choosing a car battery charger, purchase one that is applicable to your vehicle. Some chargers state the engine size and fuel type that the charger is designed for.

If your car battery is 5 years of age or over and your vehicle is struggling to start, it’s likely the battery is reaching the end of its life. It’s far better to get the battery replaced at your convenience than having to deal with the inconvenience of a dead battery not starting your car and the possible financial burden of breakdown recovery. Instead of reaching the end of its natural life however, car battery problems often arise due to drivers habits, consistent short journeys and even the type of car you drive. Some simple maintenance can help to prolong the life of your battery and reduce car battery problems.

Due to the toxicity found in car batteries, it is illegal to dispose of a car battery in household waste. If replacing your car battery, your local auto garage, recycling centre or scrap metal merchants will take your battery for recycling. Certain companies will even come and collect your battery and offer you a small fee. Car battery scrap value is often in the region of £2 – £3. The recycling process either involves car battery components being extracted and melted down for further use, or the battery may be reconditioned if in reasonable condition.