Home What is a Catalytic Converter and How they Work

What is a Catalytic Converter and How they Work

Due to tighter air pollution regulations, catalytic converters first began widespread use in 1975 and became UK law that every new vehicle must be fitted with a CAT from 1993.

What is a catalytic converter?

A ‘catalyst’ in terms of chemistry is a substance that causes a chemical reaction. A catalytic converter uses these catalyst substances to convert harmful gases produced by the engine burning petrol or diesel, into less harmful gases before being emitted into the air.

Where are catalytic converters located?

What’s inside a catalytic converter?

Inside most modern catalytic converters are honeycomb type passageways, or older types, small ceramic beads. Whatever the structure inside a catalytic converter, there is a coating of catalysts that trigger a chemical reaction. These catalysts comprise of a thin layer of platinum, rhodium and/or palladium. Anywhere between 4-9 grams of these precious metals are used in a single catalytic converter.


How does a catalytic converter work?

The basic diagram below shows in principle how a catalytic converter works.

How a catalytic converter works

The red area of the diagram illustrates the untreated ‘raw’ engine gases that enter the catalytic converter. The burning of fossil fuels produces harmful gases to the environment and the planet that many scientists believe contribute significantly to global warming, otherwise known as the greenhouse effect.

Some of the most harmful gases produced by vehicle engines are carbon monoxide (CO), nitrogen oxides (NOx) and hydrocarbons (HC). As the engine burns fuel, the emission gases are expelled through the manifold and into the exhaust system.

The exhaust system was once only used as a means to channel engine fumes and gases out the rear of the vehicle to avoid gases entering the cabin area, and also to reduce engine noise by use of silencers or baffle boxes forming part of the exhaust system. These days however, all modern vehicles also contain a catalytic converter within the exhaust system.

As these harmful gases enter the catalytic converter, they enter through the honeycomb structure that is coated in platinum, rhodium and/or palladium. Due to the precious metals and high temperatures, these chemical elements form a reaction that converts the harmful gases into nitrogen gas (N2), of which 78% of the air comprises of, carbon dioxide (CO2) and water vapour (H2O).

The internal honeycomb structure of a catalytic converter can be made of ceramic or a metal foil. The benefits of a ceramic honeycomb is that it stands up well against long heat cycles, the downside is that it doesn’t handle vibrations very well, can crack or even explode under severe vibrations. Essentially a catalytic converter will perform at its best when it has more cells per square inch for exhaust gases to pass through, along with more precious metals contained in the mixture that is coated onto the ceramic or metals cells within the CAT.


How efficient are catalytic converters 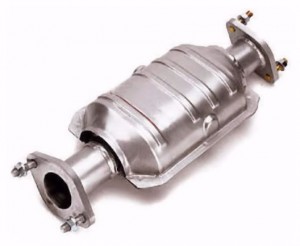 Efficiency is measured by a lambda sensor, one placed before the catalytic converter and one after. These sensors constantly measure the air/fuel ratio present in exhaust gases and inform the engine management system whether the device is working efficiently or not. The engine management light may illuminate on the dashboard if there is an issue.

When were catalytic converters introduced in the UK

All petrol cars manufactured in the UK from 1993 had a catalytic converter fitted as standard to comply with harsher emission regulations.


How long do catalyst converters last, do they wear out?

In general, a catalytic converter will last as long as the vehicle, with the average age of a typical car being anywhere between 100,000 to 150,000 miles. That’s based on the catalytic converter being an original equipment manufacturer device, or OEM which are made from high quality materials and built to a high standard. Aftermarket CATS however can tend to be of lower quality and can therefore have less of a lifespan, anywhere from three years upwards depending on the quality.


Are catalytic converters required by law in the UK?

Vehicle emission roadside tests can occur and if a vehicle is found to breach the legal emissions limit, you will be given 14 days to rectify the faults to bring your vehicle back in-line with legal emissions limits. Unless your vehicle complies with the rectification notice and within the time limit, a Notice of Intended Prosecution (NIP) will follow. If other defects are found that make your vehicle unsafe for use on public roads, it’s likely that your vehicle will be seized. Diesel cars on the other hand, unlike petrol cars don’t qualify for a full gas emissions test at the MOT station, only a smoke test. Therefore it is not a necessary part of the MOT test to check the presence of a catalytic converter within a diesel powered car.

The value, or worth of used catalytic converters varies considerably. Whether the CAT is genuine (OEM), a lower quality aftermarket device, the condition it is in (whether it is damaged) and the make and model of vehicle it is taken from determine the scrap value of any catalytic converter.

Almost all petrol cars manufactured since 1992 will have a catalytic converter, all of which contain valuable precious metals. Some more valuable than others, but a thief will know that a modern BMW petrol for example will likely have a genuine OEM catalytic converter, which will be of high scrap value,

Catalytic converter theft does of course require the thief to get under the vehicle remove the CAT and get away as soon as possible to reduce the possibility of being caught. As a result, vehicles with higher ground clearance such as 4×4’s pose a significant risk as the underside is easily accessible for thieves. The large diesel engines which had CATs fitted as standard from 2001 will often have catalytic converters that contain larger quantities of precious metals. If possible, to help in reducing the risk of theft, park your vehicle in a garage, or if a garage is not possible, park in a well-lit area.

An ideal method to deter thieves is to fit a clamp or cage protector to your catalytic converter. Thieves will often use crude and simple methods to essentially hack the CAT from the exhaust pipe. Although simple, plenty of practice means the theft can be made possible in less than a minute.

Prices range and a quick search on Google will give you an idea of what to expect. The theft of a catalytic converter can result in the loss of many hundreds or even thousands of pounds. It is of course not just the device itself, but often then entire exhaust and the inconvenience of the repair. If you believe you may be at risk, a catalytic converter may ultimately be the answer. Fleet owners may benefit in particular.

Do catalytic converter cleaners work?
Providing you’re realistic in what you are expecting an additive can do, it can certainly help. Of course no additive or cleaner can repair or restore a failed catalytic converter, but they can help in the removal of built-up deposits on a functioning converter to aid in restoring efficiency. A chocked up, clogged up CAT can cause the lambda sensor, or oxygen sensor which precisely measure the air/fuel ratio present in exhaust gases, both before and after the converter to report to the engine management system that the catalytic converter isn’t functioning correctly due to the gas output. Usually an engine management light will illuminate on the dashboard. Catalytic converter cleaner can aid in such issues. You may also find it beneficial to try, especially due to the additive not being particularly expensive if your cars fuel emissions are borderline MOT failure.