The distance that drivers can see at night is far shorter, often making hazards seemingly appear out of nowhere. This is particularly an issue on bendy roads where your vehicles headlights are not always pointing in the same direction as the driver is looking.

It’s precisely this issue where technology aids the driver on bendy roads and sharp corners in form of the Adaptive Front-lighting System (AFS).

What is Adaptive Front-lighting System

With standard headlights, when you travel around a corner in your car, your vehicle headlights continue to shine straight ahead, essentially illuminating more of the roadside, rather than the road ahead. AFS aims to address this issue by adapting the angle of the headlights in the direction that the driver intends on traveling. AFS can also increase the intensity of the headlights, allowing the driver to further extend visibility.

How Does the Adaptive Front-lighting System Work? 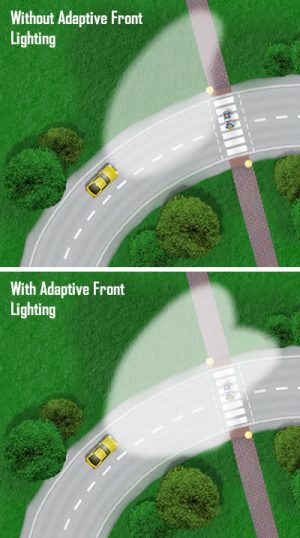 AFS works by utilising multiple sensors to determine the appropriate angle in which to direct the headlights. Sensors are used to:

Once this data is calculated via the system control unit, from their default centre facing position, adaptive front headlights can direct light up to around 15 degrees left to right. This enables the adaptive headlights a total range of 30 degrees movement.

Without Adaptive Front Headlights
As can be seen in the image without adaptive front lighting, both headlight beams are fixed, shining directly ahead, effectively illuminating more of the verge rather than the road ahead. The pedestrian crossing the road does not become illuminated by the vehicle lights.

With Adaptive Front Headlights
By using AFS, the angle of individual headlamps can be adjusted independently, effectively splitting apart allowing for a much wider angle of illumination. Now that the headlights are illuminating the road ahead and not predominantly the verge, the pedestrian can be seen much sooner.

Just before taking a sharp 90 degree turn, standard headlights light up the road directly in front, but the road you intend on turning into, not so much. Adaptive lighting often features additional side-lights that switch on to illuminate left or right turns, prior to making the turn. This lighting can illuminate up to 80 degrees of additional lighting to the side of the vehicle. This can be particularly beneficial for illuminating pedestrians who might be crossing the road as you are turning.

Yaw of a Car

Yaw is defined as in this example, the car spinning to the left or to the right on a vertical axis.

Another limitation of standard car headlights is their inability is to remain level, regardless of the conditions. As an example, if you drive over a hump, the front of the vehicle rises as it goes over the hump initially and in that instance, the vehicle headlights will shine slightly upwards, as a result this can temporarily blind other drivers.