What is a Car Alternator Explained

A car alternator is an integral component of the engine which produces electricity. The electricity produced by the alternator charges the car battery and powers the many vehicle utilities.

To generate electricity, alternators must spin and they do this via a belt which is driven by the engine.

Alternators (which is how the name originated) produce an alternating current (AC) and are set to spin at around 2 to 3 times the crankshaft speed of the engine.

Over time, cars began getting more advanced and a greater amount of electricity was required to power the various utilities and components such as lights, windscreen wipers, heater fans etc.

Cars started using alternators in 1960 where prior to this, less efficient and dynamic dynamos (generators) were used.

Alternators being more robust than dynamos; have a longer lifespan, can produce a useful power output at even low speeds (engine idle can charge a battery), can withstand much higher spinning speeds than dynamos and produce less heat.

A car battery essentially has limited use; its main purpose being to power the starter motor which turns and starts the engine. Once the engine has started, the alternator takes over the handling of all electricity supplies to the vehicle and also recharges the battery. 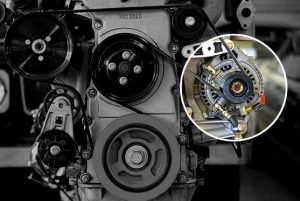 Once the vehicle engine has been switched off, any electrical devices that are still in operation such as radio or lights would then be powered by the car battery.

Signs of a Failing Alternator

As with anything that has moving parts, it will have a limited lifespan due to wear and tear. A failing or dead alternator will typically involve the entire unit being replaced rather than repaired.

Your alternator might be failing If driving at night for example, you notice that your headlights have a reduction in brightness when you turn on another electrical device, it’s a symptom that the alternator is not working efficiently and not producing enough power.

A dashboard warning light may also illuminate indicating that the battery is weak. This is because electricity is being taken from the battery due to the alternator being incapable of powering all systems. This might only happen when you initiate multiple electrical in-car accessories.

The dashboard symbol is often red and looks like a battery, though for some makes of cars, this warning light may say ‘ALT’, meaning alternator.