Anti-lock braking system or the commonly known abbreviation ‘ABS’ were introduced as standard on many cars during the mid-1980’s.

What do anti-lock brakes do?

Drivers when faced with an emergency situation inevitably slam on the brakes as hard as possible in a desperate attempt to stop the car in the shortest distance. In a car without anti-lock brakes, this procedure typically locks the wheels and initiates a skid. A skid renders a car out of control because the tyres have lost traction with the road surface, therefore reducing the ability to come to a stop in a quick and controlled manner.

During a skid the wheels will be locked and under these circumstances, the ability to steer the vehicle is almost entirely impossible. As the name suggests, anti-lock brakes prevent the wheels in most circumstances from locking.

How Do Anti-Lock Brakes Work?

ABS works by having sensors that detect if one or more wheels are locking during braking. If a wheel begins to lock, the system takes over by reducing the braking of the locking wheel/s – therefore unlocking it. An ECU (Electronic Control Unit) monitors the rotational speed of the wheels. If the system detects a wheel with slower rotational speed, hydraulic valves reduce the braking effect.

Why are anti-lock brakes important and safe? 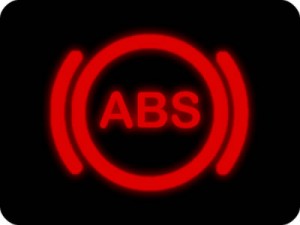 If the tyres of a vehicle are not skidding, then there is traction between the rubber and the road surface and therefore control. A vehicle will come to a stop much sooner if brakes under as heavy load as possible, whilst maintaining traction with the road surface. As anti-lock brakes prevent the wheels from locking, it is also possible to steer the vehicle in an emergency stop procedure, potentially allowing a driver to steer away from an otherwise inevitable collision. How do anti-lock brakes work?

Almost all modern cars have computer systems on board. Part of this system controls the braking in the form of anti-lock brake control modules. Car manufacturers have their own ABS, some that work a little differently from others. Essentially however, sensors detect the wheel speed to determine if any of the wheels are trying to lock-up under braking. If the computer determines that one or more wheels are attempting to lock-up, hydraulic valves reduce braking to an affected wheel, or all wheels if necessary.

Does ABS stop you faster?

ABS will most likely stop you faster if compared to a vehicle without ABS that is skidding due to locked wheels in slippery wet conditions. Generally speaking however, it’s a popular misconception that anti-lock brakes make you stop faster than a vehicle without. The primary purpose behind ABS is to avoid wheel locking so as to remain in control of the steering and therefore ABS won’t make a car stop faster compared to one without. Rather than ABS making you stop faster, there are however some conditions where having ABS can make you stop slower.

Is ABS good in snow?

Harsh braking in snow is one example where ABS may take a vehicle longer to stop compared to a vehicle without ABS. If the wheels become locked on a vehicle without ABS, they can act in a similar way to a plough allowing snow to build up and accumulate in front of the tyres which in turn causes friction slowing the vehicle down. In loose snow, locked wheels may also dig-in and make contact with the tarmac. A similar affect can be said whilst braking on gravel. A car fitted with ABS however will remain on the surface due to the wheels not locking, potentially increasing stopping distances.

That being said, it’s never ideal to lock the wheels due to loss of steering ability, even in slippery conditions such as snow. A high level of anticipation and planning is required to safely drive in snow and ice regardless of the braking system a vehicle has. For further information and continued reading, see how to drive in snow safely

How to use anti-lock brakes

A cars brakes that utilises the anti-lock braking system is very easy to use. Simply exert firm and constant pressure onto the brake pedal until the vehicle has stopped. There is no need to pump the brake pedal. Remember however, the point of ABS is the ability to steer and not to stop sooner.

If braking in an emergency with ABS, apply firm pressure onto the brake pedal and if possible depress the clutch. ABS only works whilst the engine is running, depressing the clutch will aid in avoiding engine stall. As you have the ability to steer, look for an escape route rather than colliding with a vehicle in front. Focus your observation on the escape route and not obstruction you are trying to avoid. Steer away from the obstruction to the escape route.

How to test ABS

It’s a good idea to test your anti-lock brakes to get a feel of what it like to stop in an emergency situation. Driving Standards Agency practical driving tests involve a simulated emergency stop. Use the method described above but ensure you choose a straight and quiet road which is clear of other traffic and pedestrians. The DVSA emergency stop procedure tutorial offers a guide to the manoeuvre that driving examiners expect.

Does my car have anti-lock brakes?

You can’t see anti-lock brakes, so a reasonable question may be how can I tell if my car has anti-lock brakes? Whilst starting your car or turning the ignition on an ABS symbol / light will illuminate on the dashboard and extinguish moments later if ABS is fitted. See below for ABS dashboard symbol. All cars made for the European Union after July 2004 must legally have anti-lock brakes fitted. So if your car is newer than July 2004, it will have ABS.

Another indication that your car is fitted with ABS is if you have ever braked hard and felt a pulsating, juddering sensation on the brake pedal. This may be accompanied by a strange groaning noise. This is normal and is simply the ABS system activating. Finally, if you have a vehicle owner’s manual, this will tell you if ABS is fitted to your vehicle.

If an ABS light stays on, will it fail an MOT?

Immediately after engine ignition, the ABS light should stay on for a few seconds only and extinguish. If the light remains illuminated, a vehicle will not pass the MOT and fail until the cause is diagnosed and fixed. A faulty ABS is often due to corroded sensors. It’s often cost effective to have MOT failing vehicle defects repaired at your own convenience and at a garage of your choice before undertaking an MOT test. For further information on what an MOT test involves, see what is an MOT test.

Certain anti-lock brakes produce a noise, vibration and pulsating feel to the brake pedal. Particular systems are prone to more noise and vibration than others, but this is perfectly normal and indicates that the ABS system is functioning and active. The pulsating sensation that may be felt on the brake pedal is the ABS applying and releasing pressure to the brakes.

Why is the ABS Light on?

If your anti-lock braking system fails, you will receive a warning light on your dashboard. This may be orange or red. See dashboard warning lights for further information. There is no need to panic however as your normal hydraulic brakes are unaffected and you will be able to slow down and stop as normal. In an emergency braking situation however, there is the potential to lock the wheels and skid due to the ABS being inactive, so take your vehicle to your nearest dealer for repair at your soonest convenience.

Are braking techniques needed with ABS?

Good braking techniques are still essential to remain safe on the road, regardless of whether a vehicle has ABS or not. Progressive braking is a a safe driving technique, which: