Home How to Drive on a Motorway

How to Drive on a Motorway

Even though motorways cause a great deal of fear in those that have not experienced them or have little experience, they are in fact the safest roads to drive on in Britain.


Motorway lanes are often wide and straight, have no roundabouts or right turns. Still, many of us prefer to avoid motorways by taking the longer route. Detailed in this section is the correct procedure for joining UK motorways, driving on motorways along with the rules.

This is the part that most people dread, especially when joining a busy motorway.

For further information on joining a motorway, along with the correct procedure and motorway signs that you may encounter whilst joining, see:


Driving on a motorway 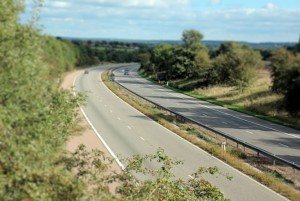 Motorways can range from two lanes or more

Motorways can range from 2 lanes upwards and use blue signs compared to dual carriageway A roads that use green signs. As soon as you have joined a motorway, remain in the left lane until you have become accustomed to the change of speed and the traffic around you.

Learner drivers are now permitted to drive on motorways provided they are accompanied by an approved driving instructor (ADI) and that the training vehicle has dual controls fitted. However, the practical driving test does not involve driving on motorways and if a test candidate were to accidentally join a motorway and if it was the test candidates fault, a test failure would be issued.

The motorway reflective studs or cat’s eyes are used to help drivers establish the correct lane and lane discipline during low light conditions. Motorway studs use a specific colour depending on their placement on the carriageway.

Many motorway accidents are caused due to a lack of sufficient observation when changing lanes or overtaking. For the safety of yourself and others, it’s important that the MSM (Mirror, Signal, Manoeuvre) routine is used and also to check the car blind spot. A guide on the correct procedure for motorway overtaking is available. 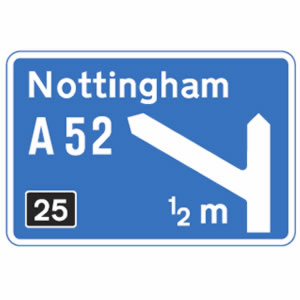 Frequent all-round observation, including looking well-ahead is important to check for traffic joining the motorway. If you see other vehicles joining ahead, be prepared to either slow down gradually, being careful to take into account any vehicles behind you, or move to another lane using the motorway overtaking procedure. Often where there is an exit slip road indicated by this motorway sign, a motorway entrance slip road follows shortly after.

A motorway interchange is where a motorway may divide or merge together. An interchange sign such as the one blow will often give you a 1 mile warning giving you plenty of time to choose your required lane.

Getting the correct lane as early as possible is important as it may become difficult if left too late. Certain lanes may also have solid white lines the closer you get to the interchange, making it illegal to cross over.

Motorway exit signs provide information where the junction will take you, the road name and how far the exit junction is. The exit sign initially gives you a 1 mile warning, followed by half a mile. Countdown markers are then used starting with a 300 yard marker, then 200 and finally a 100 yard marker. Use the MSM routine at the 300 yard marker to give other traffic plenty of warning of your intentions. On the exit deceleration slip road, pay particular attention to signs providing information on which lane you need for your destination.

First time on a motorway

It is not compulsory that learner drivers are taught on motorways at any stage of their training. Therefore, your first drive on a motorway may be on your own.

Dual carriageways are similar to many motorways. If you are concerned about driving on a motorway, take plenty of practice on a dual carriageway initially before taking to the motorway. Motorways can be rather scary for the first time, but once you are on, you will soon realise that they’re not so bad after all. And remember, motorways are statistically the safest roads to drive on in the UK.

Although motorways are the safest roads to drive on in the UK, a few checks and procedures can make your journey safer.