Home Driving Tips How to Control a Skidding Car

How to Control a Skidding Car

It is of course best to avoid a loss of control in the first place as the cause of a skidding car is by far, the result of driver error. So, what causes a car to skid?

Main Causes of a Skid

A skid is the result of a loss of traction between the vehicle tyres and the road surface. This is usually because the driver has:

Though a skid if often the result of driver error, there are of course exceptions where a mechanical, electrical or other defect such as a tyre blowout can cause a skid.

What Types of Skid are There?

If your vehicle is involved in a skid, you’ll encounter either:

Symptoms That Your Car Is Losing Control

Fundamentally, the most important aspect of controlling a skid is to acknowledge that your vehicle has in fact lost control and to act on this assertively and quickly. As obvious as this might sound, to acknowledge that a car is losing or has lost control isn’t clearly perceived by some drivers at early onset. The quicker you react, the better the chance of you regaining control. Generally, if your car feels unusual and doesn’t react as it normally does, it could be a symptom of a loss of control and may include one or more of these issues:

How to Control a Skidding Car

How you should attempt to control a skidding car depends on the types of skid that you’re experiencing as detailed below. Understanding the symptoms, your location (on a bend in the road for example) and the road condition (road is wet or icy for example), will enable you to react and deal with the skid in a responsive manner. 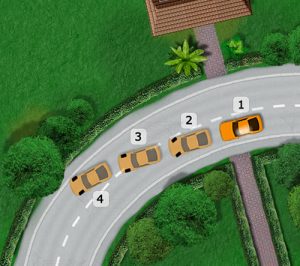 Front Wheel Skid – Car continues ahead regardless of steering

How does a front wheel skid occur?
The front wheels have lost traction with the road surface due to either driving too fast for the tyres to retain grip This can be simply due to speed or a combination of speed and weather conditions such as a wet road, or sharp, sudden braking whilst entering a corner can cause a front wheel skid.

How to control a front wheel skid 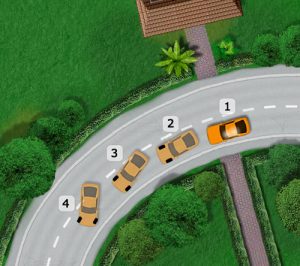 Rear Wheel Skid – Rear of the car swings round

How does a rear wheel skid occur?
Reasons for a rear wheel skid are similar to that of a front wheel skid – entering a corner too fast, sharp braking or accelerating. Again bad weather conditions can induce or exacerbate a situation. A car skidding around a corner where the rear loses traction is often attributed to rear wheel drive cars, where the driver has applied power at an inappropriate time.

HOW TO CONTROL A Rear WHEEL SKID

Steering into the Skid

Steering into the skid means that if the rear of your car is skidding to the right, then steer to the right and if the rear skids to the left, steer to the left. The most important thing to do is to look in the direction of where you originally intended to go, which is down the road. By doing this, you’ll naturally steer in that direction and therefore ‘steer into the skid’.

Within the EU, all cars must have anti-lock braking systems (ABS) fitted since the mid 1980’s and as such, it is highly unlikely that a four wheel skid will occur. An example pre-ABS skid would be a driver braking hard to avoid a hazard, resulting in all four wheels locking up. If you happen to be driving a vehicle without ABS or your vehicle has an ABS fault and find yourself emergency braking with all wheels locking, remove your foot from the brakes and begin firmly (but avoid stomping on the brake) pumping the pedal rhythmically.

This is called cadence braking and essentially uses the same technique as ABS by preventing the wheels from locking. The main benefit of this is that you can steer away from the hazard, unlike locked wheels which do not allow you to steer.

Sometimes an emergency might happen which results in a loss of control and a skid. Often though, it is driver error where it could have been avoided. The best way to avoid a skid is to: