The 2 second rule is a method used to gain a safe following distance at any speed and is also an easy system for all drivers to remember and to put into action.

The rule is very simple and easy to understand by using the description and diagram below. Remaining at least 2 seconds from the vehicle in front will provide a distance of one car length per 5 mph, at which ever speed you drive. The 2 second rule is used regardless of speed because the distance between your vehicle and the one in front will extend the faster you travel. Using the 2 second rule helps to significantly reduce accidents or reduce collision damage if one occurs.

Using this rule provides not only a general safer way of driving, but can also help to save fuel, brake wear and paint damage as a result of stone chips occurring due to driving too close to the car in-front. See how to save petrol for further information.

The 2 second rule should also be utilised by the learner driver as the driving test examiner will most certainly fail your driving test for driving too close to a vehicle (tailgating), or remaining close to the vehicle for too long.

Although the 2 second rule applies at any speed, it should only be used on dry roads with ideal driving conditions. Other rules are detailed below. 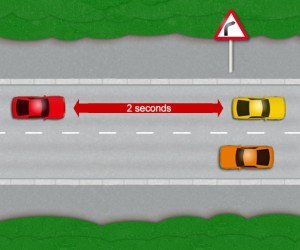 How to do the 2 second rule

By following the 2 second rule, if the car in front of you brakes sharply, you will be able to slow down in good time, but also allow plenty of time for the car behind you to slow down. It’s also essential to learn safe braking techniques such as progressive braking. Progressive braking once learned allows for safer driving and less wear and tear on your vehicle.

What is the 4 Second Rule?

The 4 second rule is essentially the same technique as the 2 second rule, except 4 seconds are used due to weather / road conditions. Generally if the conditions are wet, the 2 seconds should be doubled to 4 seconds to allow for longer braking distances due to slippery roads.

What is the 10 Second Rule?

The 10 second rule should be used for more extreme weather and road conditions where far greater stopping distances are required. Use the 10 second rule where roads are frosty, icy or have snow coverage.

Further information can be found for a cars stopping distance in various weather conditions, at various speed limits. Stopping distances are a necessary part of the theory test questions and is used alongside the 2 second rule for safer driving.

Practice the 2 second rule as often as possible and before long, you will find that you maintain a safe following distance without need of practicing this technique. During the driving test it is acceptable to drive too close to a vehicle when for example:

It is important after these situations to impose the 2 second rule as soon as is safely possible, with safe regard to the vehicle behind.