It’s still not illegal for many to drive and smoke, however current laws since July 2009 in England, Scotland, Wales and Northern Ireland affect company vehicles and must be smoke-free at all times if they are used:

When carrying passengers, vehicles that come under the laws set out above with a roof that can be stowed or removed will not be required to be smoke free when the roof is completely removed or stowed.

Vehicles that are used primarily for private purposes are not by law, required to be smoke free.

Smoking whilst driving with children

Since 1st October 2014, it is illegal to smoke in the car with children under 18 years of age. This law that applies to England can see drivers faced with a fine of £50 if caught. The no-smoking whilst driving or stationary with children law already applies in Wales. The law does not apply to anyone smoking in the car without children (providing they are not transporting members of the public and are not in the course of paid or voluntary work), or driving a convertible car with the top down. 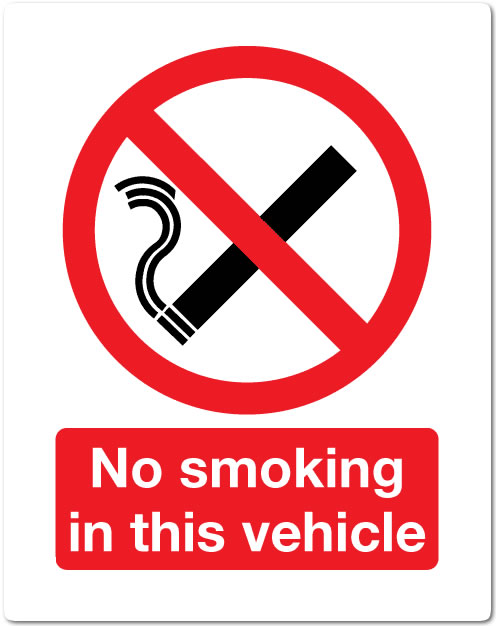 No smoking in this vehicle regulation signs

Vehicles required by law to be smoke free must display a no smoking sign in each compartment of the vehicle in which people can be carried. This must show the international no smoking symbol no smaller than 70 mm in diameter

Is it dangerous to smoke and drive?

There are dangers associated with smoking whilst driving. Firstly, the process of smoking requires that the driver must locate the cigarettes and of course the lighter. This involves removing one hand from the steering wheel and can often involve the driver taking their eyes off the road entirely to find them. This takes the form of both a physical and mental distraction from the road.

Other issues may involve cigarette ash falling onto the drivers lap or even the expended cigarette coming back into the car when its intended route was out the window. Other dangers include second hand smoke, or ‘passive smoking’.


Is it illegal to smoke and drive?

Currently in the UK, other than the laws set out above in regards to company vehicles and children under the age of 18, there is no law that directly prohibits smoking whilst driving. Certain countries do however operate a similar ban to the UK on smoking in private vehicles with child passengers.

Other than the laws outlined above, it is possible to be prosecuted and charged with careless driving (or dangerous driving if an incident is more severe), if your actions are hazardous to other road users due to bad driving, or your actions contribute or cause an accident. Along with smoking, certain other forms of distractions may see a driver charged with careless or dangerous driving such as:


Should it be illegal to smoke and drive?

Although banning all motorists from smoking whilst driving may appear to be a good idea in theory, in practice, is it enforceable? Where would the resources come from to enforce a nationwide blanket ban?

Certain organisations would like to see a blanket ban for all motorists prohibiting them from smoking whilst driving at any time. If such bill made it to parliament and ultimately became law, there will be drivers who abide by the new law and those that oppose. Issues could arise for either driver.

Nicotine is highly addictive, not only chemically, but often for smokers more so due to the simple habit itself. A smoker who is refused cigarettes very quickly becomes anxious, irritable and stressed – not the ideal conditions for safe driving.

The driver can of course pull over, park up and light up, but on today’s roads it’s not such an easy task to simply pull over. Double yellow lines, traffic wardens and parking enforcement cameras everywhere make that job difficult. Also the law abiding motorists will likely be more preoccupied with finding a safe and legal place to stop than they are with the quality of their driving.

There are then of course the motorists who will smoke whilst driving regardless of any law, and there will be a lot of them. Attempting to light a cigarette whilst driving and out of view of other motorists would likely be challenging not to mention dangerous. And of course once lit, they will need to hide the offending embers out of view of other vehicles, likely resulting in longer periods of driving without two hands on the wheel.

Such a law may in effect cause accidents rather than reduce them, especially if little or no thought goes into the consequences of nicotine deprived drivers. Perhaps a smoking driver could in some situations be a safer driver. We all know that many motorists find driving stressful, it can make them anxious and some drivers tend to get angry very easily when behind the wheel. Perhaps a cigarette helps them to calm down and relax.