Passing parked cars is a relatively common driving test failure. The reason being that a learner driver may not effectively forward plan, is unable to predict a possible situation occurring or does not correctly judge a situation they are currently in.


Driving tests usually always involve taking a wide variety of road types. Many of these can often be residential streets that have parked cars on either one or both sides of the road. Driving examiners take these roads for among other things, to see how you deal with passing parked cars and meeting oncoming vehicles.

This tutorial explains the correct distance for passing parked cars along with the correct approach and when you should give-way to other vehicles.

The key to resolving a hazardous driving situation is thinking distance – the time it takes for a driver to react to a situation. Many learners fail tests not because they’re going too fast in legal terms, but because they don’t give themselves enough time to think. If the road ahead looks hazardous, ease off the gas, observe and think.

Although passing parked cars rules vary depending on the situation, generally who has right of way is detailed by the diagrams below. Let’s assume for the scenarios below, you are the driver of the red car.

Passing parked cars on the left

Parked cars on the left

Passing the yellow parked cars on the left, the red car does not have right of way due to the necessity of crossing onto the opposite side of the road in order to clear the parked cars. The red car will need to wait behind the yellow cars to give way to oncoming vehicles. 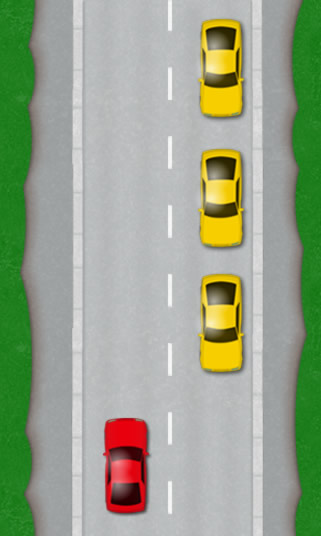 Passing parked cars on the right

Parked cars on the right

Passing the yellow parked cars on the right, the red car has right of way. Vehicles traveling in the opposite direction will need to wait behind the yellow cars until it is clear for them to cross onto the opposite side of the road. 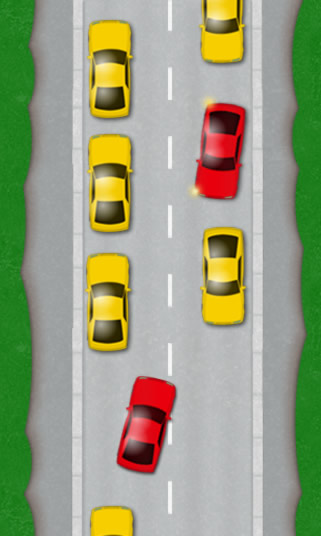 Cars parked on both sides of the road

Vehicles parked on both sides of the road represented by the yellow cars, nobody has right of way. Either driver of the red cars will need to find a suitable gap to pull into to allow the other vehicle to continue. 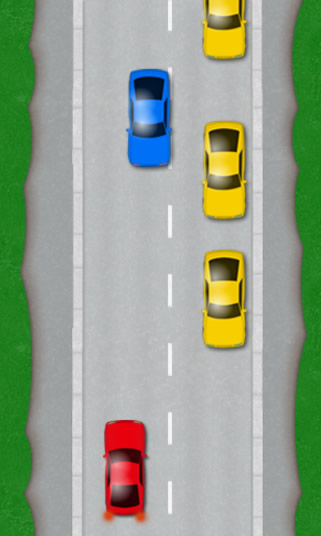 Giving way if you have right of way

As the driver of the red car with the yellow parked cars on the opposite side of the road, you have right of way. However, if an oncoming vehicle has already committed to the overtaking procedure whilst you are approaching, you should give way. It’s essential during a driving test that you look well ahead whilst before and whilst passing parked cars for this type of situation and be prepared to give way even if it’s your right of way.

If a situation such as this occurs during a driving test and you did not give way, either you or the other vehicle will need to manoeuvre out of the way. If there are no gaps within the parked cars for the blue car to enter, it may require one you needing to reverse to a point in the road where you can pass. This situation certainly isn’t ideal during a driving test and mounting the pavement to allow a vehicle to pass will certainly fail a test.

The key is to observe the parked cars well before you reach them, gently slow the car and look well ahead for oncoming vehicles. Whilst passing the parked cars, look out for gaps in the within the cars that are large enough for an oncoming vehicle to pull into. If the road is narrow, be prepared to stop and wait for the oncoming car to pull into the gap and allow you to proceed. 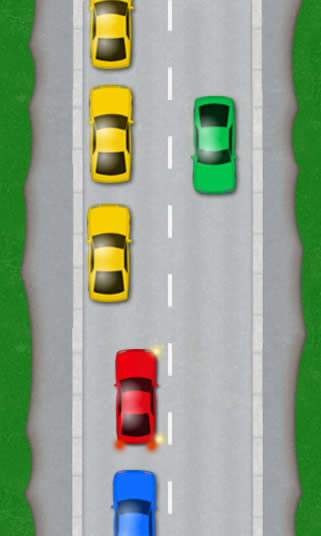 Generally it is unnecessary to signal when passing parked cars. Excessive signalling in this situation can potentially be confusing to other drivers as they may think you are making a right turn.

There are however situations where a signal may be of benefit to other vehicles. As illustrated in the diagram, the red car is approaching yellow parked cars on the left so will need to give way for the green car. The road is narrow, so when you stop to give way, your road position will not be too dissimilar to that of the parked cars. A signal to the right on this occasion will provide the driver of the vehicle behind you with your intention to continue round to the right, passed the parked cars and that you have simply not parked behind the other parked cars.

Any situation that a signal will eliminate any possible confusion is necessary. It’s not always parked cars of course. Any object on your side of the road that requires you give way to oncoming vehicles may require a signal if there is a vehicle driving behind you and you believe the object may be difficult for the vehicle behind you to see. This could be small road-works for example. Again, this will make your intentions clear to the driver behind.

Passing parked cars round bends, on hills and dips in the road represent a significant increase in danger due to the inability to see oncoming vehicles until very late. You also need to be aware that if there is an oncoming motorist, they may be unaware of the parked cars you are passing, which may result in them not reducing their speed.

Although the same rules apply as above, a further reduction in speed is often necessary due to the increased danger. Remain vigilant of any approaching vehicle and prepare to react swiftly by slowing, stopping or moving into any gaps within the parked cars. Take care to also keep check of following traffic behind you. They will of course need to react as quickly as you. If a vehicle behind is following very closely, an even further reduction in speed may be necessary to accommodate a greater reaction time for the driver to safely stop behind you.

Passing parked cars and your speed

If passing parked cars on a narrow road for example, it isn’t always possible to leave a 1 metre clearance gap. Appropriate speed now becomes significant. The speed at which you drive in this situation depends on the passing clearance available from the parked cars and your ability to spot any hazards ahead such as approaching vehicles. Even in a 30 mph zone, on a narrow, bendy road whilst passing parked cars, it may be necessary to drive significantly slower than the speed limit.

If you are giving way behind a parked car whilst waiting for an oncoming car to pass, before moving off it may be necessary to take a quick glance into the side mirrors and possibly the blind spots if in an area with many cyclists.