If you have never driven before and are unfamiliar with the car instruments, your first driving lesson will see your instructor cover these.


Along with the cockpit drill which will see you cover the car hand and foot controls along with the various auxiliary controls such as indicators, you’ll also need an understanding of the instrument panel.

Often in the form of dials, the majority of cars electronic analog instrument cluster panels display this basic information, some very basic panels however may display less information perhaps with as little as two dials, whilst others may have many more dials to inform the driver of every aspect of the vehicle.

Whilst providing the same information, other modern cars may use digital displays instead of the traditional analog dials to inform the driver. For the moment however, we’ll be concentrating on the typical dial based instrument panel used in the majority of motor vehicles.

As can be seen in the image, this typical car instrument panel layout has a temperature and fuel gauge, a speedometer gauge and a gauge called the rev counter.

The most basic of panels will have a speedometer and fuel gauge. Very basic panels may not have a rev counter gauge, though using a vehicle that does have a rev counter can be beneficial for learning to drive as it can be a useful tool in preventing the car from stalling. 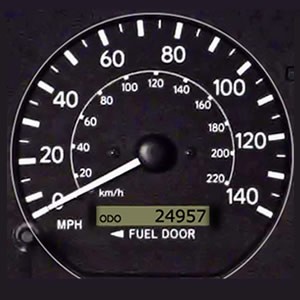 Located on all instrument panels, the speedometer simply informs the driver of the speed of the vehicle in miles per hour (mph) and in kilometers per hour (km/h). UK speed limit signs are displayed in mph and so UK car will usually display the speed in mph on the outer edge of the gauge along with km/h found on the inside.

Often located within the speedometer is a odometer or milometer as it’s also known as. There are two variants of this. One odometer displays the overall miles the car has traveled from being manufactured and the other version is a trip-odometer which unlike the other version can be reset. the trip-odometer can be beneficial to the driver to calculate distances of trips and to calculate fuel consumption. 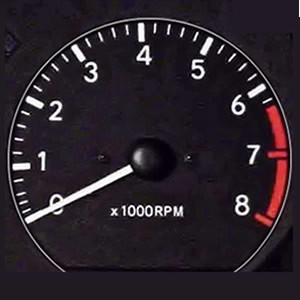 Inside the car engine are components that spin, each complete spin being a cycle. Each cycle is termed as a rev. The rev, or revolutions counter informs the driver of how many revs per minute (rpm) that the engine is running at. When the engine is running, but idle, a typical rpm is around 1000 to 1500.

The higher the revs, the faster the engine is spinning. ‘Red lining it’ is a phrase used when a driver is thrashing the engine. The red line on the rev counter is there to warn the driver that they are reaching the maximum speed of the engine. At this point to avoid potential damage, the driver will either need to change up a gear or to take their foot off of the accelerator. Many modern car engines now have rev limiters which if the engine is pushed beyond its abilities and revs beyond the red line, the rev limiter intermittently cuts power to the engine to prevent damage.

When moving off in a car, a learner driver will need to slightly increase the engine idle rpm to around 2000 to 2500 rpm to help in preening stalling. As this provides a visual representation of the engine speed, it is a valuable tool for learner drivers. 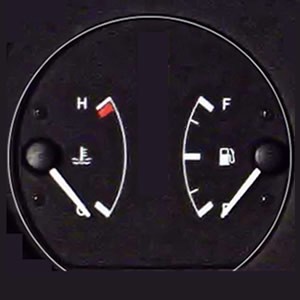 The temperature gauge illustrated to the left of the image is there to inform the driver that the engine is running at optimal temperature where the needle sites usually around midway on the gauge. If the needle begins to rise towards the red mark, it signals a problem. Engine coolant is used to keep engines running at a optimal temperature, if coolant levels are running low, temperatures may rise. an increase in engine temperature may also be a leak or blockage in the coolant system or a malfunction of a component required to keep the engine cool.

If the engine begins to run too hot, always stop when safe to do so and seek assistance. An overheated engine can seize up and will likely need replacing – at very high financial cost.

All cars are fitted with a fuel gauge. This gauge informs the driver of how much fuel is remaining in the tank. Some modern vehicles may also display on a digital panel how many miles are possible with the remaining fuel. How many miles you gain from a tank of fuel depend on the way you drive and the type of road (speed) you drive on. Constant stopping and moving off such as at traffic lights in an urban environment will use more fuel.

The car instrument panel tutorial forms part of the cockpit drill tutorial where you’ll be guided through the process of understanding the cars controls for the first time. If you haven’t already, read: