One-way streets, one-way systems and roads will likely be a part of the driving test if available, although this depends on where the test centre is located.

This tutorial explains one-way systems / street rules, how to locate them and how to correctly deal with them whilst joining and whilst driving within them.

During a driving test, the examiner will not try and trick you into driving up a one-way street in the wrong direction. They may however say something along the lines of ‘take the next available left’ and if the next road on the left is a one-way road with no entry from your direction, you will need to be sure what you are doing. Remain vigilant for all road signs whilst driving and in the case of one-way streets, no left or right turn signs.

Red circular road signs or circular signs with a red ring indicate a prohibition. A one-way road will usually have a no left or no right turn sign placed a short distance before the junction to inform motorists. On the junction itself, there will be a no entry road sign as illustrated in the images above.

Two-way traffic on route crossing ahead

Driving on a one-way street / road

Let’s assume you are now driving on a one-way street in the correct direction. It may not always be too easy to tell if you are on a one-way road, blue rectangular one way traffic signs will be placed at the beginning of the road and at intervals along the way to inform motorists that the road is one way. Road signs will inform you of what happens at the end of the one-way road. Often a one-way road will end, giving way to road with two-way traffic. 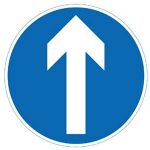 You may see an ahead only road sign. Though this looks similar to a one-way traffic sign, it has a very different meaning. For example, you could be at a junction that states ahead only (no turning left / right), but it could be on a two-way street. This is a mandatory sign, where if you were to make a left or right turn, you could be driving into a one-way street, against the flow of traffic. 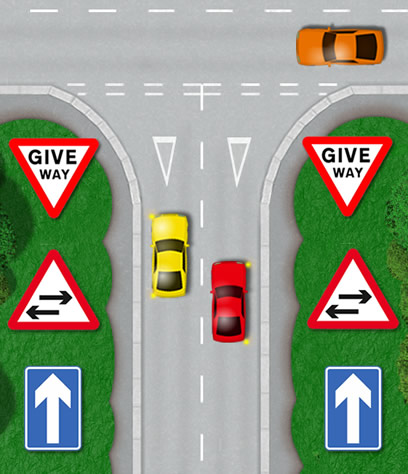 One-way T-junctions as illustrated in the diagram often have two lanes that merge into a two-way road. It’s important to select the correct lane. If you are turning right you will need to select the right lane.

If during a driving test you struggle to get into the correct lane due to either leaving it too late or due to high levels of traffic, remain in your current lane.

One-way systems can present a confusing challenge to not only learner drivers, but experienced drivers alike. They can often comprise of multiple lanes. During a driving test, the examiner will either tell you which lane they would like you to take, or ask you to ‘follow the signs for’ – leaving it for you to decide which lane is appropriate. 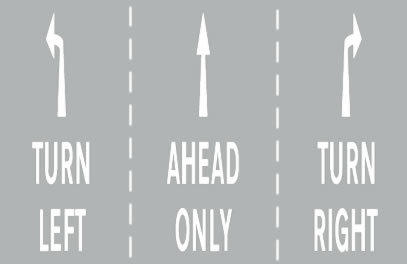 One-way road markings are often placed on one-way roads and systems, especially those with high traffic. They are used as another visual aid alongside signs. Get in lane in good time as leaving it too late may prevent you from gaining access to the correct lane.

Busy one-way systems will involve a great deal of observation and anticipation and planning. You will need to safely use the correct lanes but you will also need to deal with cyclists and pedestrians. Pedestrian crossings are often located on one-way systems.

Lane straddling is when a motorist does not keep within the line confines of their own lane. This can be dangerous as it can risk a collision with another vehicle or cyclist if the driver is unaware what they are doing. For further information, see lane straddling.

At one-way systems, junctions and roundabouts, be aware of large vehicles. Large vehicles often need to straddle lanes as they need to extra space for turning. Give large vehicles extra room in such situations.

Overtaking on a one-way road

You are legally permitted to overtake one the left on a one way street.