HGV’s, lorries and trucks are large, heavy and often slow. They often appear as a source of inconvenience due to their slow speeds and manoeuvering capabilities.


However, they are the reason why goods are available in our shops and require a great deal of skill to manoeuvre. Large vehicles will often struggle to manouevre around the condensed town and city streets.

Always be patient and courteous to drivers of large vehicles. As skilled as they may be, a driver of a large vehicle has limited observation (see blind spot below) around their vehicle and the last thing you want is to be on the wrong side of 40 tonne HGV as it’s making a turn.

In this tutorial, we cover a safe method for driving near large vehicles. In order to drive safely around large vehicles, you must be aware of hazards and anticipate and plan ahead. If you have passed the theory test, you’ll have already covered some of this guide, if not, this tutorial will should prove to be an asset for when taking the theory test and learning to drive.

Large vehicles must often navigate busy narrow streets in order to reach their destination such as retail outlets and supermarkets. Being very wide and long makes turning a challenge on many urban roads. A driver of a large vehicle will often have little choice but to take up more than one lane to safely manoeuvre so to avoiding running up kerbs and pavements. 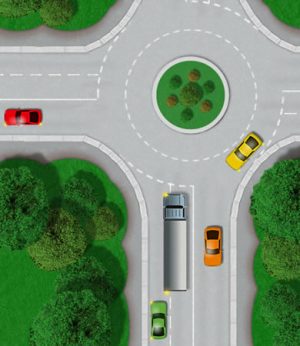 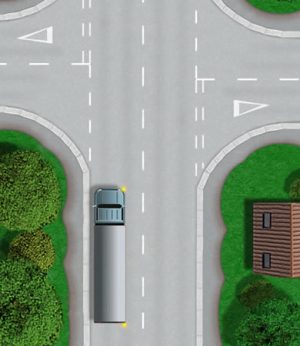 For example, to make a successful turn, the driver of a large vehicle may approach a roundabout or T-junction with the intention of turning left, but may be using much, or all of the right-hand lane. This is to widen the turning angle, therefore making it easier and safer. The same applies for left and right turns – the driver may approach a right turn from the left lane for example (see diagrams).

If you are driving behind a large vehicle at a junction, roundabout or left / right turn, stay back and allow the vehicle room to manoeuvre. It’s an unnerving situation when driving alongside a large vehicle, then realising it needs extra space to turn and that extra space it needs is where you are. It therefore makes sense not to find yourself in that situation in the first place. 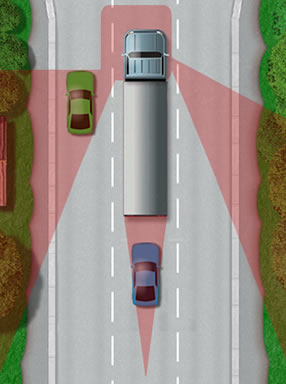 Almost all vehicles have blind spots. Blind spots are areas that the driver of the vehicle cannot see in their mirrors. Blind spot areas for cars are covered in another tutorial. Large vehicles as you can imagine, come with larger blind spots. The red shaded area in the diagram indicates the lorries blind spot.

Avoid if possible to enter a large vehicles blind spot in areas where the vehicle needs to turn and manoeuvre. Such areas include turns, junctions and roundabouts.

If you are in the vehicles blind spot, the driver may be unable to see you which could ultimately result in a collision. You’ll also need to ensure that you’re not in the blind spot area before overtaking.

Large vehicles tend to move slower than cars which often result in car drivers overtaking. Large vehicles can of course overtake even slower moving vehicles, so it’s important not to drive to closely to the rear of the lorry. Driving too close, or tailgating a lorry has two issues; you may be in the lorry drivers blind spot, so if they decide to pull out, they will not see you about to overtake, plus tailgating a large vehicle gives you less view of the road ahead.

If you can’t see the lorries door mirrors, the driver cannot see you. Stay well back so the driver can see you and run through the MSPSL routine before overtaking. Remember also that large vehicles are also long vehicles and take much more time to overtake. Only consider doing so on a long, straight and flat road. See overtaking for further details.

High winds represent another hazard. High-sided vehicles such as HGV’s, lorries and large vans are susceptible to being blown off-course in high winds. A strong gust of wind can easily push a large vehicle into the another lane or the opposite side of the road, particularly on open, exposed roads. Think carefully before overtaking a large vehicle and consider is it really necessary and is it safe to do so?

Arched bridges may provide only enough space for a large vehicle

Smaller vehicles such as cars can often pass through simultaneously

Arched bridges can be located on urban or rural roads. Large vehicles being wide and tall may need to travel through an arched bridge taking up the centre of the road (all of the road), where otherwise two cars could fit through simultaneously.

Large vehicles produce a large amount of spray when driving on wet roads which can significantly reduce your view of the road ahead – even with your wipers on. Keep a good distance from large vehicles, especially on wet roads and follow the 2 second rule technique, which is doubled to 4 seconds in wet weather.

Other types of large vehicles are buses. Though buses require similar caution whilst driving near, buses and bus lanes require a certain knowledge, that otherwise can esily fail a driving test. See