Understanding and maintaining a safe speed around road bends can be a challenge. For some drivers, they base this understanding on the maximum speed for which they can travel around a bend without losing traction to the road.


Others on the other hand may drive too cautiously and as a result of their slow speed may become a hazard themselves. Limit point analysis aims to address this by providing motorists with a system by which to understand a safe speed which enables you to safely stop within a distance seen to be clear.

Limit point analysis in theory is simple as it is defined as the furthest uninterrupted point you have of the road ahead.

Although simple in theory, limit point analysis is more challenging to put into effective practice. Let’s start however by offering an explanation of exactly what the limit point is.

What is the limit point

As mentioned earlier, the limit point is the furthest point that can be seen of the road ahead. Where limit point analysis becomes effective is its use on bends in the road, or other hazards such as the apex of a hill or bridge in the road. Let’s take a look at a visual representation of a bend in the road so as to provide an understanding. 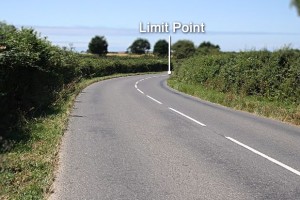 Taking a drive along a typical country road will see you encountering a typical bend as represented in the image to the right.

The furthest point that which you can see of your side of the road is marked in the image. At this particular moment, there is no way of knowing what is beyond this limit point. There may be a cyclist, an animal, a broken down or parked vehicle – anything.

On a straight road looking into the horizon, the two sides of the road appear to eventually meet and disappear. The same can be said for a bend in the road. Both sides appear to meet each other and effectively become a vanishing point.

Limit point analysis offers the driver a technique of establishing a suitable speed at which to drive and safely stop if there is a hazard in the road.

As can be seen in the diagram of a similar bend in the road to that in the image above, from the drivers visual perspective, point A and point B are combined to make the visual limit point, or the vanishing point.

As can also be seen is the broken-down orange car that will only become apparent to the driver of the red car as he gets closer to the bend.

The speed at which the red car is traveling at will determine whether he will be able to stop in time if necessary, take emergency evasive action, or impact the rear-end of the orange car.

If the driver of the red car is using the limit point analysis as a guide to a safe speed for a particular bend in the road, he should be fine. As you are approaching the bend, to correctly analyses the limit point, you should look for one of three situations:


How does limit point analysis help me

Following, chasing or backing away from the limit point allows for two points of information:

It’s important to understand however that even by correctly following the limit point analysis, it’s not going to tell you the correct and safe speed at which corners should be taken. There are many factors that determine this.

For example the weather, wet or icy roads, condition of the road / tarmac, type / condition of vehicle / tyres, just to name a few examples. There are many accidents each year where drivers fall off the road round corners. Following the limit point technique provides a driver with a good deal of information about the road ahead, offers them the ability to safely stop in an emergency and provided other conditions as above are taken into account, makes for a safe and efficient drive.


How to analyse limit points

Most drivers tend to base their ability for driving through a corner on how fast it can be achieved rather than if they’re able to stop in time if an emergency situation arises. Stopping distance is essential if you don’t like the idea of being involved in an accident and the limit point analysis can be used for anything that resembles a hazard, not just a bend in the road. To analyse the limit points on a corner:

Before reaching the corner, ease off the accelerator and use the progressive braking technique to slow down to where the limit point stops moving towards you. You are now at an appropriate speed for taking the corner based on ideal conditions. Your speed is of course subject to weather / road conditions, traffic conditions and the ability of both you and your vehicle. It’s important to find the appropriate speed of the corner before entering it to avoid braking through the corner. As the limit point begins the move away, you may begin to accelerate again.

Who can learn limit point analysis

To fully take advantage of the limit point technique, a driver must be confident in their ability to control the car, take weather / road conditions into account and to be observant of traffic conditions, other hazards and road signs and markings. Novice drivers will benefit from a basic understanding of the limit point as a guide to stopping distances and to gauge the appropriate speed at which to enter a bend in the road.

Guides and tutorials related to the limit point