What is a U-turn?

The definition of a U-turn means that you are turning the car around in the road without the need to reverse.

It is done in one complete manoeuvre to travel back in the opposite direction you originally came from. An alternative to a U-turn is a turn in the road or otherwise known as a 3 point turn.

Although it is legal to make U-turns on many of the UK roads, it is important to beware of road signs prohibiting U-turns and not to inconvenience other road users and become a hazard. 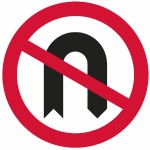 Making a U-turn within a location that is legally permitted may still see a driver issued with a FPN where they represent a danger to other road users or pedestrians. This would however come under the offence of careless driving and not for specifically making a U-turn.

Certain local councils are able to issue a Penalty Charge Notice (PCN) to motorists making an illegal manoeuvre such as a U-turn, though a PCN is non-endorsable and only a fine is issued.

Before making a U-turn, always ask yourself:

If you are in doubt, do not attempt the U-turn and find an alternative method for turning your vehicle around. Before attempting to make a U-turn, all-round observation is essential. It is potentially a dangerous manoeuvre to carry out at places other than large roundabouts as you typically need to cross lines of opposing traffic and that other drivers will not be expecting you to make a U-turn.

The safest method for making a U-turn is pull up on the left initially – though don’t forget to use your mirrors and signal before doing so. Once stopped, cancel your signal and take a good look in your mirrors, check the blind spot and signal to the right when you intend on moving off. Be particularly aware of motorcycles and cyclists who are difficult to see before moving off.

Mini roundabouts can be particularly dangerous to make a U-turn as drivers are not expecting you to follow round and take the same exit you entered the roundabout with. When making a U-turn, never mount a kerb.