We are all aware that exceeding the speed limit is illegal and with the ever increasing static and mobile enforcement cameras in the UK, speeding is an offence that catches out many motorists each year.


Minimum speed limits on the other hand is a law that on the most part, is not often enforced in the UK.

Certain countries enforce the minimum speed limit in a rather more assertive manner than that of the UK.

Due to the infrequent use of such law, many of us in the UK will have never seen a minimum speed limit sign and were perhaps unaware of their existence.

So the question is, if there isn’t a minimum speed limit sign, can you travel at any speed you like legally, providing you do not exceed the maximum? 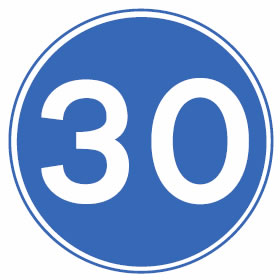 Generally speaking no. Where the few minimum speed limit signs are in the UK, they are used to ensure traffic keeps running smoothly, but outside of any area that has a minimum speed limit, it’s down to the driver to use common sense and courtesy to determine as safe and appropriate minimum speed at which to drive.

Minimum speed limits are put in force to keep traffic moving at a speed that is consistent and smooth. Vehicles that are constantly accelerating and braking are at higher risk of collision. Where minimum speed limits are mandatory are locations that emergency services might struggle to gain access such as tunnels. 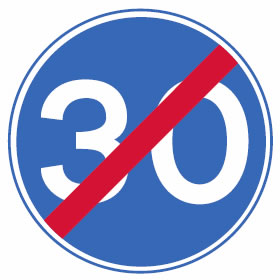 Is there a motorway minimum speed limit in the UK?

Many people are nervous when driving on motorways due to the volume of traffic and the high speeds. Such drivers may tend to drive a little slower than the maximum speed limit of 70 mph.

Anywhere between 50 mph and 70 mph is acceptable although any slower, you would yourself become a hazard and increase the potential of being involved in an accident or creating an accident for others. If you do feel the need to drive excessively slow on a motorway, if possible find an alternative route that eliminates such high speed roads.


driving too slow, is it dangerous?

It can be due to two main reasons. On a high speed road such as motorways or dual carriageways, excessively slow speeds effectively creates a hazardous obstacle that other motorists must avoid. Drivers may not correctly assess a much slower vehicles speed in time resulting in abrupt braking or evasive overtaking. This can be particularly hazardous for large vehicles such as HGV’s that need a good deal of time to prepare in a change of speed or direction.

Slow moving vehicles typically utilise hazard warning beacons to alert motorists of a potential hazard. Motorists hogging the centre lane, particularly when they’re driving rather slowly is a form of inconsiderate driving that infuriates most motorists as it can often force drivers to illegally undertake rather than overtake.

Another reason why driving too slow is dangerous can be found on single carriageway roads where overtaking is difficult. Following motorists will likely become stressed and impatient whilst following an excessively slow vehicle leading to the possibility of dangerous overtaking manoeuvres and erratic driving.

Can you be fined for driving too slow

Although there is no minimum speed limit on the majority of UK roads, you can still be fined for driving too slow if it is seen that you are a hazard to other road users. There is no specific penalty for driving too slowly and as such, penalties may be as little as a verbal warning by a police officer along with a lecture of the dangers of driving too slow and in more serious cases, a motorist may find themselves in court charged with driving without due care and attention or without reasonable consideration for other road users (penalty code CD30). The more serious penalty CD30 comes with penalty points on a motorists licence, anywhere from 3 to 9 along with a fine. Penalty points stay on a motorists licence for four years from the date of the offence and are likely to seriously impact the cost of car insurance.

The amount of penalty points set between 3 and 9 and a fine of anything up to a maximum of £5,000 are determined by the seriousness of the incident and the decision of the court.


If driving excessively slow is dangerous, what should I do?

Driving too slow may originate from an driving incident that has knocked the confidence out of them, making them feel vulnerable and scared behind the wheel. For others, they may hold the belief that it is in fact safer, whilst others may drive excessively slow to save on fuel.

If you are unable to break the driving too slow habit yourself, seek the guidance of a qualified driving instructor. Refresher driving lessons are essentially offered to those that can drive, but need to require lost driving skills. This short driving course often lasting just a few hours will see the instructor impart their knowledge and skills, making you a more confident and safer driver.

If driving slowly is dangerous, how should I drive?

Quite simply, if weather, road and traffic conditions allow, drive at whatever the speed limit is on that particular road.

One of the proposed methods to crackdown on slow drivers is to introduce slow speed cameras. The fact is however, current speed cameras are the subject of much debate, particularly whether they do in fact help to reduce accidents or provide substantial revenue to the government.

Not only several millions of pounds are generated each year from speed cameras, they ironically represent a hazard to drivers who upon observing a speed camera, reach for the brakes to abruptly reduce the vehicles speed, regardless of whether they were travelling over the speed limit or not. This reactive form of driving is dangerous as no premeditated safety checks are performed prior to the action.

Bringing in slow speed cameras into the mix will unquestionably increase revenue, but is also likely to cause much confusion among motorists. It could be argued that if motorists were all driving at the correct speed, cameras wouldn’t be an issue anyway, but in reality, it doesn’t work like that. Instead, we might see drivers hitting the gas pedal instead of the brake, and on wet or icy roads, that’s going to spell disaster.