Home Nearest You Can Park to a Junction

Nearest You Can Park to a Junction

Many parts of The Highway Code simply advise motorists on safe motoring procedures to adhere to, and is not necessarily illegal to infringe on such advice.


Parking near junctions (Rule 243) being one piece of advice stating: ‘DO NOT stop or park opposite or within 10 metres (32 feet) of a junction, except in an authorised parking space’. Almost all of us have parked within 10 metres of a junction at some point and as can be seen by observing car parking habits around us, many people park too close on a daily basis.

If it’s not illegal, can I still get a ticket?

Although there’s not a law that specifically prohibits motorists from parking close to a junction, you may still find your vehicle ticketed on your return. A non-endorsable (no penalty points added to your driving licence) Fixed Penalty Notice (FPN) under the offence of unnecessary obstruction will see you fined £50, or up to £100 for more serious circumstances.

I’ve been parking here for a long time, why do I get a ticket now?

You may find that you have parked in the same or similar location for some time, but have only now received a ticket. Police Community Support Officers (PCSOs) patrol designated routes. The area you park may be an infrequent part of the route hence the amount of time it took to receive a ticket. Areas that receive greater tickets issued are due to residents making complaints.

For example, neighbourhoods close to hospitals where drivers attempt to avoid paying for parking by using roads close to hospitals. although not illegal in itself, can cause annoyance for local residence due to a lack of parking on their own roads, parking over driveways and dropped kerbs. PCSO’s will have their routes temporarily altered to such areas in an attempt to restrict those who park inconsiderately.


So why is it illegal to park close to a junction? 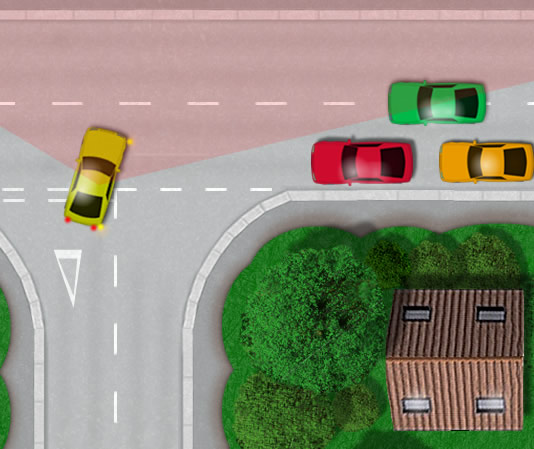 The car parked too close to the junction prevent the driver of the yellow car from a clear view.

As seen in the image to the right, the yellow vehicle is attempting to turn right out of the junction. The green car is obscured from the yellow cars view by the two vehicles that are parked too close to the junction. The red shaded area illustrates the drivers view of the road, by which time they are some distance into the road.

Other instances where it can prove dangerous to park close to a junction are for pedestrians crossing the road. Junctions are typically crossing areas for pedestrians. Children, wheelchair users and the elderly are particularly vulnerable when attempting to cross due to vehicles being obscured that may be turning into the junction. You must also consider unhindered access for the emergency services.

Other potential issues to consider are located at small and narrow residential streets where larger vehicles need access for deliveries. It’s not uncommon for vehicle owners to discover damage on a corner of their vehicle that’s parked close to a junction, often due to a larger vehicle having inadequate space to manoeuvre.


Parking opposite a junction

The cars parked opposite the junction force the green car into the path of the yellow car.

Another danger associated with parking too close to a junction is opposite one. The diagram to the right illustrates the yellow vehicle turning left out of the junction. Their main observations will be initially to the right as this is the direction of oncoming traffic. Observation to the left may be too late to take into account of the green car overtaking the cars parked opposite the junction.

Should I challenge a ticket in court?

Even if you were not parked in prohibited area such as on double or single yellow lines, it’s possible you were causing an obstruction and potential hazard for other road users and pedestrians.

If you received a ticket for parking too close to a junction, the PCSO will usually accumulate some form of evidence such as distance from the junction and photographic evidence to substantiate their claims should it go to court.

If you are unclear of the reasons, or of the legitimacy a FPN has been issued, initially accumulate your own evidence of the exact location your vehicle was parked at the time it was ticketed, any obstructions it may be causing along with the distance to them. Contact the authority that issued the notice to inquire specific details of the offence. If you are sure that a ticket has been issued unlawfully, it may prove beneficial to escalate the matter to court, although if proved guilty, much higher costs will be certain.


How far should you park from a junction

It’s more of a question of common sense rather than the need to get out your tape measure every time you park. As a guide (not law), the Highway Code states 10 metres from a junction and not to park opposite. Many drivers do of course park close to a junction, so before doing so, see if it’s possible to avoid it. If you do park a little close, take into account larger vehicles such as delivery vans, lorries, ambulances and vehicles with trailers. Can they access the area and if so, can they do so without the need to mount pavements? Are you obstructing pedestrian access anywhere, potentially effecting the vulnerable? Obstructing dropped kerbs or driveways? If the answer is no to all, they you’re probably good to go.

Guides related to junctions and fines