What is Lane Straddling Explained

Lane straddling is where a vehicle is positioned over lane lines rather than between them, therefore it’s occupying more than one lane. In many circumstances, this is simply down to inconsiderate and careless driving, though in certain circumstances it’s necessary. Let’s look at some examples of lane straddling, both inappropriately and when it’s necessary.

Intentional lane straddling can be seen in a slow moving queue of traffic, where queue jumpers race along the overtaking lane (or any other lane that get’s them ahead), only to abruptly push their way into a gap at the merge point.

If both lanes merge together, if the road conditions are right and if done properly, using both lanes actually helps to reduce congestion – this is called zip merging. Instead, most drivers tend to queue and some find it irritating when passed by another driver who hasn’t spent time queuing.

The irritated driver may straddle lanes, preventing the queue jumper from getting ahead. This is best avoided as it may increase congestion and cause tempers to flare.

Straddling lanes will often increase congestion and irritate other drivers.

This can easily result in a collision and is particularly unpleasant if you happen to be a motorcycle or bicycle rider that they collide with. 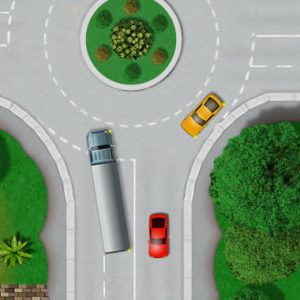 Generally, cars never need to straddle lanes, long vehicles on the other hand often do. Many town and city centres were built during a period where huge lorries (HGV) were’t invented, so it stands to reason that roads within these areas aren’t best suited to them.

Being very long, these vehicles will often need to take an alternative path at roundabouts and junctions, else they may collide with roadside objects or mount the pavement. Bus drivers and even drivers of large vans also find certain roads challenging.

Always consider the extra room that a long vehicle may require when they are turning. If in doubt, stay back and allow the vehicle to finish manoeuvring. The last thing you want is to be in the lorry drivers blind spot when it is making a turn.