Motorway studs or reflective cat’s eyes as they’re also called are used on many high speed roads throughout the world.


Often used on roads with little or no lighting such as high speed ‘A’ roads or dual carriageways, they are a safety aid for motorists for establishing the correct lane and maintaining lace discipline at night or times of poor visibility such as rain and fog.

Motorway studs use specific colours depending on the placement. The stud colour signifies which part of you’re driving on. In order to eliminate confusion, the placement colours never change.

The diagram below shows a typical motorway section, along with an exit ‘Slip Road’ with the corresponding reflective stud colours and placement.

Motorway or dual carriageway reflective studs (or cat’s eyes as they are also referred to) are designed to be most effective in poor light conditions by reflecting light back to the driver to signify which part of the motorway they are driving on, or where they might need to exit.

The colour of the studs always has the same placement on motorways and dual carriageways. Questions relating to reflective road studs are often asked during the theory test. 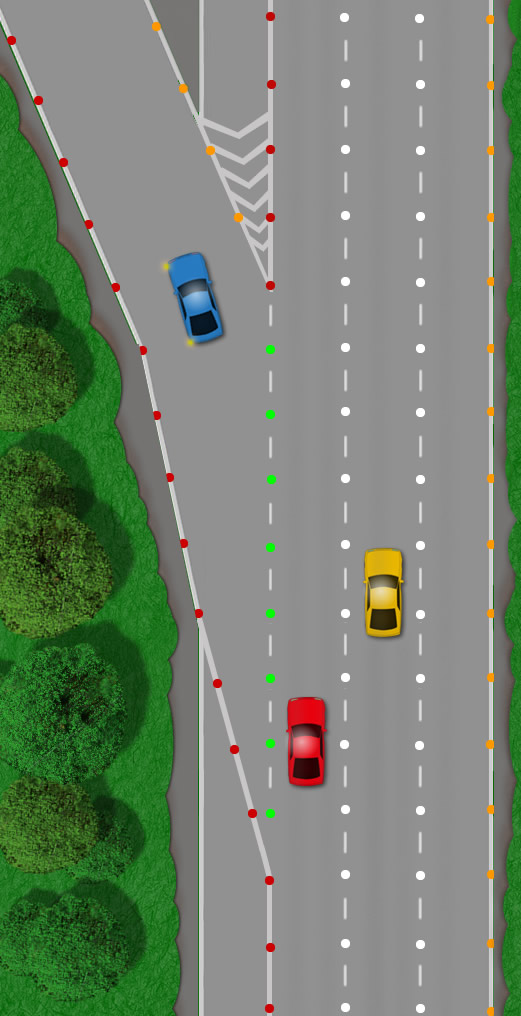 
Motorways and the theory test

The driving theory test involves multiple choice answer with questions covering many aspects of road safety and regulations. Several of these questions will relate to motorway safety, driving rules and motorway reflective stud colours and their placements on the road.