All driving test centres are either based in a rural area or if located in a busy town or city, are often located on the outskirts.

They are located in these areas so as many diverse road types can be taken during the driving test. Most driving test routes include rural country roads and villages. Although country roads appear to be a quiet and pleasant drive, they often produce significantly more hazards than urban roads.

This tutorial offers an explanation of the many hazards and dangers associated with country road driving and how to best be prepared for the practical driving test.

The condition of country roads are often lower quality than those of urban roads. Due to country roads not being as well maintained, there are often greater chances of hitting potholes. Potholes may puncture a tyre, cause wheel damage, cause defective tracking and can even damage the car mechanically. 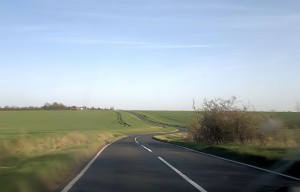 Country roads may seem like an easy drive, but are in fact the most dangerous roads to drive on

If during a driving test, try to avoid potholes safely by either slowing down, or if safe to do so, drive around them. If vehicles are driving closely behind you or it is not safe to drive around them if on a bend, you will have no option but to drive through them.

Country roads have a tendency to be uneven. Although in dry conditions this doesn’t pose any problems, hazards occur during wet periods or after it has rained in the form of standing water. Cambers are often implemented into roads to allow water drainage. A road that has not had effective cambers built or has failing cambers due to poor maintenance or erosion can cause standing water.


A car traveling at speed that hits standing water will aquaplane. This is where one or more of the tyres loses contact with the road surface by a layer of water. The best method for dealing with aquaplaning is to avoid it. If it is raining or has recently rained, drive at the appropriate speed for the road. If you are approaching areas in the road that are difficult to see ahead, take it slow. If you do hit standing water, don’t steer the wheels, try to keep the car straight and don’t use the brakes if possible.

Animals on the road

Whilst driving in the country, the chances of meeting animals on the road is greatly increased. Frequent use of the interior mirror is essential on country roads as to establish if any vehicles are behind you and how close. Animals have a tendency to dash across the road right in front of you. If there are no vehicles behind you or they are not driving too close, gently slow down to try and avoid the animal.

Although it is tempting to brake harshly, try and avoid this as it may produce a skid and lead to lose of control. Current weather and road conditions should also be taken into account when braking. Driving tests have been failed due to learner drivers braking too harshly or swerving aggressively to avoid animals in the road.

Farm traffic such as tractors and trailers are frequently seen on country roads. During a driving test, the examiner will be expecting you to overtake and make progress only if it is safe to do so. Don’t think the examiner is sitting there impatiently waiting for you to overtake. Farm vehicles are often wide and long and may be difficult to pass regardless of their speed. Before overtaking, ensure the road is clear ahead and wide enough for you to safely pass. If you feel it is not safe to overtake, remain behind the vehicle.

Another potential hazard on country roads are horse riders. Again as with most country road dangers, horse riders are at their most vulnerable on the tight and twisting country road bends. Once a horse and rider has been spotted, initially check the interior mirror for any traffic behind. If vehicles are behind, slow down sooner to give the vehicles time to reduce speed. The vehicles behind may not be able to see the horses. Horses and riders must be overtaken slowly at around 15 mph.

Although the roads may appear relatively empty, you will of course meet other traffic. Villages joined by rural roads will be used by buses. Meeting buses on rural roads and village roads often requires providing extra room by slowing down and moving to the left or even on some occasions stopping is required to allow enough room.

It may be necessary to overtake farm vehicles if they are traveling at a particularly slow speed. If the road is particularly hazardous however, they more often than no pull over to allow traffic past. Other than very slow moving vehicles, horses and cyclists, it is not advised to overtake other vehicles on country roads. Country roads can be deceptive and often it appears safe to overtake when it’s not. Dips in roads, bends and other junctions joining your road often hide oncoming vehicles, so unless it’s absolutely essential, don’t overtake.

Junctions on rural roads are often closed (blind) and often require more skill than those found in towns and cities. Many country roads have a speed limit of 60 mph (National Speed Limit) and approaching junctions at high speeds requires excellent observational skills to assess what potential dangers lay ahead.

Driving tests are unlikely to be conducted during icy, frosty or bad fog conditions. They are however conducted during wet and rainy conditions. Remember the stopping distance doubles in wet conditions and this is especially important on country rural roads with all the potential hazards that can materialise. 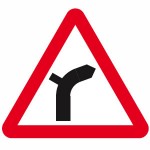 Junction on bend ahead 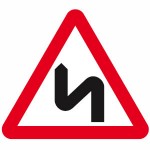 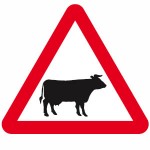 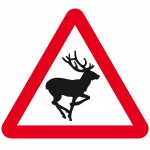 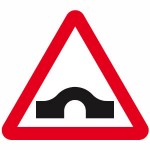 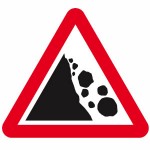 Drive at an appropriate speed. One of the main reasons why country rural roads result in the most fatal road accidents is drivers going too fast. Frequently check the interior mirror for vehicles behind and their distance from you. If they are driving too close to you, slow down especially in hazardous places like sharp bends. This will decrease the potential of a rear collision if there is a need to brake harshly. Take bends slowly. You are not only driving at a speed that you can safely stop for, but at a speed that another vehicle may also be travelling around the bend at the same time as you.

Don’t overtake unless the vehicle is very slow moving and even then, ensure you do so on a long, straight, flat road and also be aware of any junctions that may join your road before doing so. Drive slower during wet conditions, especially on bends so to increase stopping distances. Approach junctions with caution as they can be difficult to see oncoming traffic.