In terms of safety statistics, riding a motorcycle is a bad idea. Each and every day, 30 motorcycle riders are killed or injured on Great Britain’s roads, just at junctions alone.


Motorcycle riders are classed as vulnerable road users due to the lack of protection we are so used to in our cars. Being just 1% of all road traffic, motorcyclists are a minority.

Driving any vehicle comes with dangers, some such as motorcycles comes with many more. A large proportion of motorcycle accidents are due to drivers of other vehicles. As car drivers, we can reduce those fatality statistics by safer driving and being less impatient.

This tutorial covers motorcycle safety for car drivers with advice for how to drive safely around motorcycles. This tutorial is written primarily for learner drivers, though in reality, many drivers including full licence holders could benefit from reading. Let’s start with the most dangerous situations, that being –

The first being a lack of time spent observing. Quite often drivers approach junctions far too quickly, take a brief look up and down the road and pull out if it appears to be clear. Anticipate and plan for any given situation as you approach a junction. This cannot be done if the junction is approached too quickly. Approaching a junction slowly can sometimes save time as it can often give you time to take effective observation without the need to stop. 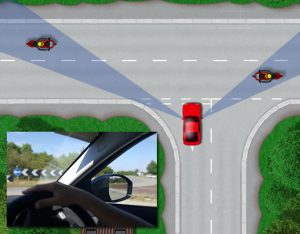 What is effective observation? In this situation, it’s to observe the road to such an extent that you are totally sure it’s safe to proceed, but in general you should look at least twice in each direction before moving out. Some ‘closed’ or blind junctions require further observation.

Another reason can be associated with the A-pillar blind spot. The A-pillar is located between the windscreen and the door (see image) and varies in width depending on the vehicle. The wider the pillar, the larger the blind spot.

The blue shaded areas in the diagram illustrates the blind spots on the road that the driver is unable to see. As can be seen, a motorcyclists or a cyclist can easily be concealed in the blind spot. Taking a little more time observing at junctions before pulling out is often sufficient enough to spot hazards that otherwise would have been missed or obscured by blind spots. 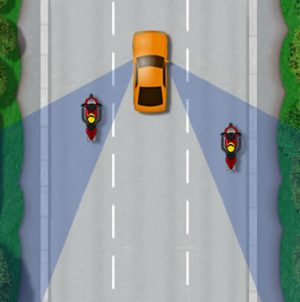 Other blind spots can be associated with areas in a vehicles mirrors that cannot be observed and so require physically looking round to check. These blind spots can easily conceal smaller vehicles such as a motorcycle.

Changing direction can include left and right turns and changing lanes, either to get in the correct lane at a junction or roundabout or overtaking a slower vehicle for example.

After checking your mirrors, always check the blind spot area corresponding to the direction you intend on moving to. For further information on mirror blind spots, see:

Riding a motorcycle comes with a whole set of hazards that many car drivers need not think about. A motorcyclist will often need to change their road position and speed based on the road surface. For example they will need to avoid loose debris on the road, oil spillages and potholes. On wet roads, manhole covers and painted lines and letters provide motorcyclists with a slippery hazard. On wet roads, a motorcycle will take longer to slow down and will need to take corners slower than usual.

Always follow the two second rule technique (four seconds in the wet) and if following a motorcycle, allow for a little extra room if possible. For further information, see:

Whilst observing, we tend to look for other cars, vans and larger vehicles and often forget about motorcycles. Remember that motorcycles are moving often at the same speed as cars, but are much smaller and therefore much harder to see. This is particularly significant during rainy, foggy and low-light conditions. At night, the lights from a motorcycle being so close together can easily appear to blend in with other traffic making the bike almost invisible.