Although easily distinguishable from each other, those that do not understand their various meanings could hinder their chances of passing. Detailed below are mandatory speed limits (those that must be obeyed by law) and advisory speed limits, (those put in place due to hazards. 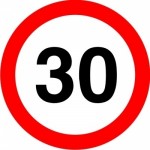 All road signs that utilize the circular red ring are mandatory, or road signs giving orders. A motorists must abide by the instructions given in these regulatory signs to remain within the law.

Some regulatory road signs are incorporated into other signs such as the temporary yellow road works sign which contains the width restriction regulatory sign.

For further information, see order road signs for the various types of regulatory UK road signs and their meanings. 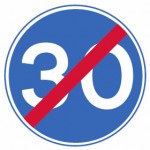 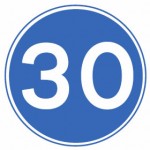 The vast majority of UK roads do not have minimum speed limit restrictions on them. Those that do impose such restrictions do so to ensure a continuous and steady flow of traffic to reduce potential hazards and accidents. 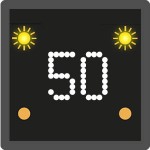 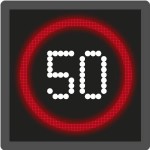 Certain motorways use a system called Active Traffic Management (ATM). In these locations motorway light signals placed at the side of the carriageway or overhead.

Variable speed limits that are contained in a red ring are mandatory. Other speed limit signs that have flashing amber lights are based on weather conditions and are advisory.

For further information on the various motorway signs, rules and regulations, see motorways. 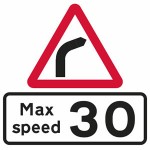 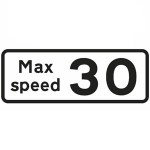 Advisory speed limits are used on a stretch of road that is potentially hazardous. The location of an advisory maximum speed limit sign varies, but can often be seen on harsh bends.

As the advisory speed limit is not contained within a red ring, it is the motorists choice of whether they obey the advised speed limit or not, providing they do not exceed the maximum regulatory speed limit.

A motorists should take weather conditions, road and traffic conditions and the severity of the potential hazard into account to base an appropriate speed.