Home Dashboard Warning Lights Why is the Airbag Light on?

Why is the Airbag Light on?

The airbag light has come on because the computer in your car has detected a fault with the airbag unit. Depending on the model of your vehicle, you may receive a symbol of an airbag deploying in front of a passenger, or illuminated letters stating ‘AIRBAG’, ‘AIRBAG OFF’, ‘AIRBAG DEACTIVATED’ or you may receive a light giving an ‘SRS’ fault. SRS stands for supplemental restraint system. Lights may illuminate in red, yellow and may also flash.

The airbag light may come on due to a fault with the: 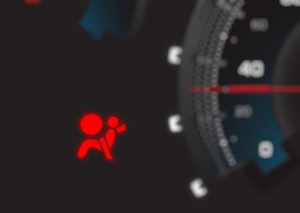 The airbag symbol on a car dashboard

What Should I do if the Airbag Light Comes on?

When you start the car, many vehicle systems do a self-test and this includes the airbag system. The airbag light should go out shortly after the engine has started unless you have manually deactivated a passenger airbag.

If the airbag light stays on (if you haven’t deactivated it), or comes on while driving, it’s unlikely airbags will be deployed in the event of an accident. It’s advisable for safety purposes to take your vehicle for an diagnosis as soon as possible. Before doing so however, check under the passenger seat for cables and connections. Part of the airbag system is often under the passenger seat and with constant moving of the seat, cables and connections can become dislodged. Ensure connections are firmly in pace.

Airbag Light and the MOT

If your vehicle is going in for an MOT test and was fitted with airbags as standard, then they must work in order to pass the MOT test inspection. You will clearly be unable to test whether the airbags are in fact functional, but in order to pass the MOT, the airbag dashboard warning light that comes on with ignition, must go out soon after and shows no warning messages.

Airbag Light on After Battery Change

Your airbag or SRS has a backup battery used to deploy the system in the event of a crash. If you have a failing main battery that fails to recharge the airbag backup battery the airbag light will come on. Replacing the main battery will resolve the charging issue, but due to a fault code already being triggered, the light may remain on until the error code has been deleted via a scan tool. This should be an inexpensive and quick job for a mechanic, or simply ask someone who might have a diagnostics scan tool.

Before attempting to reset the airbag light, you’ll first need to find the fault that is causing the light to come on, else it will keep illuminating. If you believe you have found the fault and resolved it but the light still remains on, you will need to purchase a diagnostic scan tool to reset it. These are widely available and are relatively cheap to buy.

Why are Airbags Important

Front driver and passenger airbags are designed to work effectively when used with seat belts (hence the term ‘SRS’ or ‘supplemental restraint system’). When combined, front airbags and seat belts reduce the risk of fatal injury by 68%. Studies of the general effectiveness of front airbags alone in reducing deaths based on all types of vehicle crashes range from between 8% and 14%. If purchasing a European built car and if safety is of concern, ensure you purchase a vehicle with at least front driver and passenger airbags.

Certain vehicle manufacturers also fit side-impact airbags. Whilst they may offer a certain level of protection, no convincing evidence has been established that they reduce major injuries.

Whilst it is established that the use of airbags helps to reduce serious injuries and death, they don’t come without dangers. Airbags deploy at very high speeds; depending on the make and model of vehicle, it’s around 200 mph. Airbags are designed to be most effective for normally seated adults and can therefore pose problems for children in rearward facing child seats and adults not sitting in a normal position.