The driving POM routine is an abbreviation of the Prepare Observe and Move system used by many driving instructors.


Abbreviations such as the POM routine are used to aid learner drivers in remembering correct and safe procedure during driving lessons and the driving test. Although the technique used to remember procedures is irrelevant, it is important that safety procedures are conducted where appropriate.

This tutorial explains the POM routine and when it should be applied to driving and the necessity of such a routine in the driving test.

During the process of learning to drive, the Prepare Observe Move POM routine is often explained at a very early stage by driving instructors when you begin to move the car off for the first time.

POM is used when moving off from a parked position and in general traffic such as traffic lights, junctions and roundabouts. The examiner will expect the POM routine to be applied to such routines during a driving test. 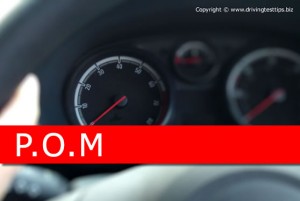 From either moving off from a parked position at the roadside or moving off in traffic, you will need to prepare your car to move. For experienced drivers, this is often a simple process, for a learner driver, the clutch biting point is often applied to avoid stalling the car.

Learner drivers have a tendency to stall the car when moving off. This could be for various reasons such as forgetting to release the handbrake, incorrect gear or raising the clutch too fast. Driving test aren’t usually failed for stalling a car, but more often for lack of observation.

Before moving off from a parked position at the roadside, it’s important to perform at least the minimum of safe observations. Starting with the interior mirror, followed by the right door mirror and one that fails many driving tests due to learners forgetting, the blind spot. Signalling may be necessary. See moving off tutorial for further information on signalling from a parked position.

Whilst observing after the car has been prepared from either a parked position or in traffic such as pulling out of a junction, it’s important to leave no delay in observations and actually moving off. Moving the car should be only done immediately after observation, if there is a delay, ensure all observations are completed again.

After the car has been prepared and all observations suggest it is clear and safe to go, the car can now be moved off. This part of the POM routine requires a good standard of clutch control to move off smoothly an without stalling.

If you do stall the car, don’t panic, stalling often doesn’t result in failing a test, it’s how you recover that can fail you. If you stall, secure the car and keep calm and in control. The POM routine will have to be made again by preparing and most importantly observing before moving.

Other Driving Routines used for Learning to Drive