The engine temperature warning light typically looks like a thermometer with 2 wavy lines at the bottom. Depending on the make of your vehicle, other symbols can include the letters ‘TEMP’, or ‘ENGINE OVERHEATING’. The symbol should briefly illuminate on your dashboard when you start the car and go out shortly after the engine has started. This is perfectly normal, but if the temperature light comes on while driving, immediate action should be taken, particularly if the symbol is red. 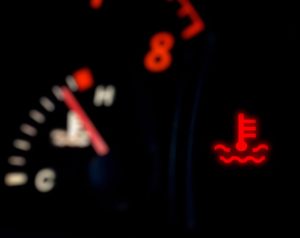 A red (occasionally yellow on some vehicles) engine temperature warning light that stays on or comes on while driving means there’s a coolant fault or your engine is overheating and requires immediate attention. Sometimes this warning light may flash. Coolant, or antifreeze as it’s also known, consists of a mixture of water and ethylene glycol and constantly circulates the engine to keep it cool (see what is engine coolant for a detailed explanation). The usual cause is that there’s insufficient coolant in the system to keep the engine running at optimal temperatures.

What to do if the Engine Temperature Warning Light Comes on

If a red engine temperature warning light comes on, it’s essential that you stop and turn the engine off as soon as it’s safe to do so. An engine that has overheated to the point that it fails will almost certainly be irreparable and will require considerable expense to replace.

Leave your engine off for at least 20 minutes (ideally a little longer) before attempting to top up with coolant. Water in the coolant tank is pressurised and hot, so leaving to cool is essential. Ideally open the cap using a thick cloth in case hot water splashes onto your hand. Though a top up of engine coolant may be required on occasions a substantial drop in levels, or frequent topping up suggests there’s a leak that needs repairing.

Having a blue engine temperature warning light appear on your dashboard shouldn’t concern you anywhere near as much as a red one. This simply means that your engine oil is not up to optimal efficiency due to the low temperature. This may also apply to certain transmission types. Drive steady and avoid pushing the engine too hard until the light goes out. On certain models of vehicles, this engine temperature light may be green.

Engine Temperature Light on but not Overheating

If you’re experiencing problems with the engine temperature light coming on, but it’s not overheating, the likely cause is a faulty sensor. A sensor is used to constantly monitor engine coolant. This information is used by the computer to determine which settings to use for the engine, for example, if it is cold the engine will burn more fuel than when it’s warm.

Symptoms of a faulty coolant temperature sensor can be: