Home Dashboard Warning Lights Why Has the Engine Oil Light Come On?

Why Has the Engine Oil Light Come On?

Your cars engine is full of many moving metal components that operate at high speeds. As they move, they create friction which in turn generates heat.


Engine oil is designed to operate at high temperatures and depending on the make and model of your vehicle, this is generally between 80°C to 100°C when the engine has reached optimal running temperature.

The engine oil light will typically come on due to there being insufficient oil. All engines consume oil and how much depends on the engine type, its age, your driving style, quality and type of oil used and engine temperature.

Can you Drive with the Engine Light On?

If there is insufficient engine oil, the internal moving components will receive less lubrication. An increase in friction will inevitably increase temperatures, which if left neglected will likely result in seized, damaged components. An engine rebuild or a new engine may be required.

It is advised that you do not drive if your engine oil light comes on. Ideally, always carry in your car a small bottle of oil and if the light comes on, stop as soon as safely possible, turn off the engine, check oil levels and replenish as required. After you have replenished oil levels, start the engine and only use the vehicle if the light has gone out. Check for any oil leaks.

Driving with the engine oil light on not only risks severe damage to the engine, but if the engine fails whilst on the move, there’s a risk on an accident. 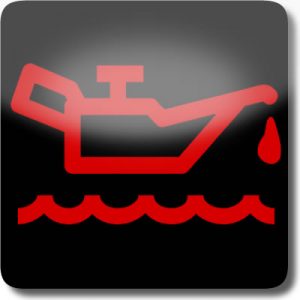 If the engine oil light stays on after replenishing oil levels, or the engine didn’t require an oil top up, this indicates an issue with oil pressure. Turn off the engine and do not attempt to drive the vehicle. Unfortunately you will have to call for a tow truck and have your car taken for repair.

Low oil pressure means that oil will not be circulating through the engine as it should and can equally cause damage as though there’s not sufficient oil. Possible reasons could be a faulty pressure sensor, failing oil pump or contaminated oil / sludge.

You may have had an oil change or service and notice a light or message regarding an issue with engine oil. Most modern cars have indicators or messages that inform the owner that an oil change is due after a certain amount of time or miles have passed. Engineers who service your vehicle should resent this, but on occasions do forget. You can either take the vehicle back and ask them to reset it (takes a minute or two) or there should be instructions in your vehicle owners manual.

Oil Light Comes on with Ignition

Because the engine has not started, there will be no oil pressure and once you have started the engine, the light should go out. This is perfectly normal.

Oil Light Comes on During Braking or Stopping

This can be caused by low oil levels, so the first thing to do is stop, turn engine off and check oil levels after a few minutes. Other factors may include the oil pressure sending switch / unit which controls relays information to the oil pressure gauge or light

Other factors may cause the oil light to come on during braking or stopping such as a worn connecting rod, crankshaft main bearings or a clogged oil pump pickup screen.