A driving test examiner may stop, terminate or even abandon (mid-test) a test for various reasons. It’s fairly rare, so if you’re a test candidate with a impending practical driving test, here are some typical reasons why a driving examiner might abandon a test.

Test Terminated Before the Drive

Some driving tests are terminated even before you get behind the wheel and start the engine. Reasons for this can include:

Ensure that you take along the correct documents to your test. Most important is your licence. If it’s the older type, take along both the plastic card and the paper counterpart.

If you have lost either part of your licence, don’t risk it, order a new one (which doesn’t have a paper counterpart) in good time, before your test. Ensure also that your licence is not defaced in any way.

Another reason for driving test termination is the failure to read a number plate from the required distance (see driving test eyesight test for specifics). If you have a tape measure at home, you can run the test yourself. If you’re in any doubt about the quality of your vision, see an optician as soon as possible. If your eyesight is not up to standard, it may not only fail your test, but may result in legal issues whilst learning to drive.

Legality and safety issues regarding the test car can see a test terminated. If you’re using a driving school’s car, then it’s usually safe to assume that it is legal and in appropriate condition for test procedures. Unfortunate situations can occur however, such as a blown light bulb on the way to a test for example. If an instructor cannot remedy the fault in good time, it’ll require the test be terminated.

If you’re using your own car, ensure the tyres are legal and free from any damage (see tyre tread depth), all lights are working, no engine warning lights (that represent a fault) are illuminated and that the vehicle has tax, an MOT (if applicable) and that you’re insured to use it. Also ensure that the vehicle is free from any damage or wear-and-tear that might represent a safety issue – both inside and out. For example, insecure body panels, cracked windscreen, faulty seat belt or headrest. See car for driving test for further details.

Test Abandoned Whilst On Drive 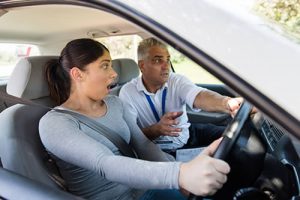 A driving examiner grabbing the steering wheel is a sign that the test isn’t going too well.

The examiner abandoning the test during the drive doesn’t happen too often, but if it does, it will be due to the following reasons:

Again, vehicle issues may result in the examiner requiring that you pull over, turn the car off and terminate the test right where you are (providing you have parked legally). This is an unfortunate occurrence as even the best maintained car can become defective at any time. Any electrical or mechanical fault that causes the examiner concern for safety can result in termination of the test.

The second category is test candidate attitude. If a test candidate exerts an attitude that is offensive of threatening to the examiner, it’s possible that the examiner will abandon the test. The DVSA have been issued new powers to deal with abusive test candidates. This may involve a candidate being banned from test centres, being forced to have an extra member of staff in the car during a test and the potential of criminal prosecution.

What Happens When an Examiner Abandons a Test?