Passed My Driving Test, Now What?


The driving test examiner will hand you your test pass certificate and you’re good to go.

In terms of claiming your full driving licence, for the majority of the time this is done by the driving examiner who retains your provisional licence, sends it off to the Driver and Vehicle Licensing Agency (DVLA), who will in turn send you your full licence, usually within two weeks.

Occasionally you may need to apply for a full licence yourself. Details of this can be located further down this page.

I passed my driving test, now what?

When the excitement wears off, many new drivers think ‘I passed my driving test, now what?’

If you’re wanting to get driving right away, the first thing to do is of course to get yourself a car. The running costs of a car, especially for a new young driver can be expensive. The high expense is often down to the car insurance. There are some things you can do to keep the expense to a minimum.

The first most important step is get the correct car. The type of car you get has a significant effect on the amount of insurance you pay, car tax and other running costs such as fuel expense. 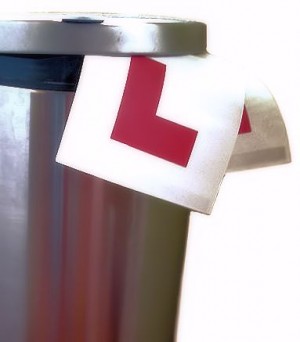 I passed my driving test, now what?

The best cars for young and new drivers guide details the most cost-efficient cars for anyone wishing to own a car. Generally speaking, go for a small car that falls within the lowest insurance and tax group possible. The lower the groups, the cheaper the car will be to tax, insure and refuel.

Before getting your new car however, get some car insurance quotes. You may find the quotes you’re given a little shocking, but there are special car insurances out there for young drivers to help keeps costs down. The car insurance help guide explains the basic insurance types, including one called black box car insurance.

In short, black box insurance requires your vehicle being fitted with a type of sat-nav device (the black box) which records your driving habits. This data is sent back to the insurance company where a computer algorithm assesses this data to establish whether you are a good or bad driver. If you driving is bad, your insurance will cost more. Any inadequacies found in your driving can be rectified with the help of the insurance company and the cost of your insurance can fall again. Basically, black box insurance rewards safe drivers and penalises those who aren’t.

New drivers statistically have a one in five probability of having a crash within the first six months of passing the driving test. The statistics are even worse for young male drivers who have just passed the test. Now there’s not really much point in saying ‘just drive safely’ because if you really want to drive like a crazy loon, then you’re going to do it anyway. So instead, let’s take a look at some of the main reasons why young drivers are prone to accidents so you can at least hopefully acknowledge these elements of danger whilst driving and do something about it before you become another statistic. Young drivers are most at risk and statistically have an increased risk of an accident when they:

The above are the main reasons why young drivers have accidents, although the potential for many more exist. It’s easy to understand how a young driver may have an accident due to one of the above circumstances, but often they can be a combination of many, if not all of the above circumstances, which for a driver who has very little experience and a false sense of confidence / security, clearly explains the statistics.

Just a little more thought before you find yourself in a potentially dangerous situation, may not only keep you, your passengers and others that could be involved in an accident healthy, your car in good condition and your insurance premium from rising to a catastrophic financial increase, there is also your licence to think about.

How many points on my new licence

It is however remarkably easy to accidentally gain points on a driving licence. Although not so much ‘accidentally’ as it’s often due to lacking in concentration which is especially a concern with new young drivers.

With the ever increasing number of speed cameras being erected throughout towns and cities, it’s becoming increasingly easy to get caught off-guard by a camera by driving just a few mile per hour over the speed limit. Many regard speed cameras as a nuisance, though the fact remains that those few miles per hour over the speed limit you are traveling at can be the difference of life and death if you were to hit a pedestrian or cyclist.

Concentration is paramount! To help concentration whilst driving, there are a few things you can do to increase this. Commentary driving is simply vocally putting into words what you see ahead of you and what you’re going to do about it. It may sound a bit daft, but it’s a highly effective method of advanced driving. It also significantly improves concentration. After a while, you will be able to do this without vocals. Emergency services such as the police use this method. Opening a window increases oxygen to the brain to aid concentration and also ensuring you are hydrated.

In an attempt to reduce accident statistics for young new drivers, the government has announced plans to overhaul young driver rules to improve safety and reduce insurance costs. Among the proposals being considered are:

Tips for young and new drivers

As a new driver and especially a young new driver, you are statistically at high risk of being involved in a car accident. You cannot gain years of driving experience within a few weeks, so an understanding of the particular circumstances that young and new drivers are most at risk will enable you to minimise your chances of being involved in an accident by eliminating some of them. Here are the top ten tips for new and young drivers.