Hatched road markings are used to separate traffic lanes and to make it safer for the vehicles turning right.

Hatched road markings have failed a considerable amount of driving tests due to a learner driver dealing with them inappropriately. Hatched road markings are simply used to separate traffic for safety reasons. Many learner drivers try to avoid driving on them at all costs, when in reality if it’s legal to do so, it can on many occasions be far safer to drive on the hatched markings.

This section explains the legality of hatched road markings and when it’s best to drive on them.

If the road is clear, try to avoid driving over the hatched road markings. Be cautious however of a vehicle behind you also turning right and cutting up beside you over the hatched area. Always check mirrors and blind spot before moving over and changing direction.

If the lane you intend on joining has cars waiting, avoiding the hatched area may result in your vehicle straddling another lane and restricting traffic flow. In this situation, you should enter the hatched area.

If the lane you intend on joining has cars waiting, drive over the hatched road markings providing the outer line is broken. 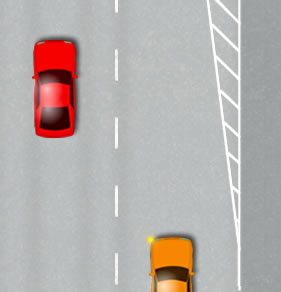 This image is an example on a dual carriageway where the far right lane or ‘fast lane’ is merging. A typical example often seen is where a 2-lane carriageway is merging into a single lane. This hatched area may be surround by a broken line, or if the section of road is hazardous, a solid line may surround the hatched area.

The hatched area surrounded by a continuous solid white line prohibits vehicles from entering this area except in an emergency. Where an emergency situation is not in progress, it is a traffic offence to enter the area.

The key is to keep a keen eye on road markings to initially establish if a hatched road area is surrounded by a continuous solid or broken line. If broken, you must then determine whether it is safer to enter the area due to other vehicles either already in the lane you intend on taking or vehicles behind you. Always remember mirror, signal, manoeuvre before changing direction and if changing lanes, you must check the blind spot before doing so.