THE DRIVING TEST IN Newton Abbot

Expect rural country road driving and high speed ‘A’ roads such as the A380 dual carriageway from Newton Abbot Driving Test Centre. Rural roads often represent a challenge for novice drivers due to high speeds met with harsh corners. To gain an understanding of a safe and appropriate speed for these road types, see the country road driving tutorial.

The test will include in-town driving where you will be assessed on most traffic systems such as roundabouts, crossroads and junctions. The examiner will request a single test manoeuvre, on occasions they may request two manoeuvres if time permits.

Involved will be a 1-in-3 possibility of the emergency stop. Test centre routes are designed by the examiners who conduct practical tests at their local test centre. The routes are designed in such a way so to involve as many diverse roads and traffic systems as possible, often including very challenging parts.


Gaining knowledge of the test routes provides valuable insight into the type of roads that will be taken during your test. Driving test routes may be available to view or a downloadable app for your mobile device in your area, including Newton Abbot Driving Test Centre.

Test centres offer a variety of times that tests can be booked throughout the day. Available times are displayed upon booking. Many test candidates benefit from booking their test so that it takes place over the quieter periods of the day.

Book your driving test online
The majority of test candidates book their driving test over the internet as the available free test slots are made visible to be taken. To make a test booking at Newton Abbot Driving Test Centre, see the book a driving test section. 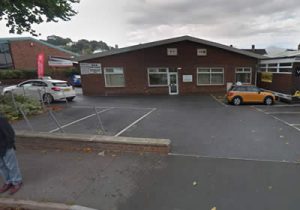 Write a review of Newton Abbot Driving Test Centre to let others know how your test went. You can tell people if you passed or failed the driving test, what the test routes were like, were there difficult parts? Tell us what the test centre was like, was there adequate facilities? Was it easy to find? and what was your examiner like on the day? It’s quick and simple – no signup necessary and only your nickname will be displayed. To ensure your review meets our guidelines, please read our Terms and Conditions prior to submission.


Create your own review
Average rating:   5 reviews
by Sue on

I recently had my test,I did fail,And to be very honest,I could tell early on this was the case. I will however be questioning if those whom have our own car,Can have camera,s in our car,s.As I found the Examiner made a few mistakes,Yet I was penalised for this. I expected to be taken around Newton abbot. This be warned was not the case,We hit the Dual Carraigeway,Where on this day was slightly windy. I had to have windows all fully down.Whilst trying to listen to a sat nav. I failed for the following marked as serious( which happened within the first 15 minates,1st distance,I was in the 3rd lane,It was not wet,With atleast 2 car distances possibly 3 as the gap. Doing just under 60mph. I failed because of the distance. 2ndly my car,Automatically turns the indicator off. It took a good minate. That was my 2nd severe fail. Now I only wish someone else was in the car. Because I know and was aware,That the gap was that big. I was doing just under 60mph,In full control,Checking mirrors etc. I,m shocked someone did not get in that space. The lady in this case told me to have a Read of the highway code before resitting. I do respect her opinion after all shes the test examiner. But I was so so nervous,At the beginning. She did nothing to try ease that. We then drove around kingsteignton. We left at 925.Arrived bk 10.15am. Not atall what I expected,In all honesty. So please be expected for the totally unexpected. And even expect not to be driving around Newton abbot.Their was not much friendly behaviour shown. And I think thats something this peticlar Examiner should work on. I can,t see her passing many put it that way. Good luck. I will be reattempting,But keeping fingers crossed its not the same person.

Have never been spoken like the way I was by the tester. Nothing but a bully who acted like I was a massive inconvenience before the test started.About half way through he started to talk to me like I was dirt and just before the end he raised his voice at me because I interrupted him due to nerves. Totally put me off and messed up the bay parking. Utterly cowardly to talk to people like that who can't talk back for fear of failing. Worst thing was I had actually managed to go with out many minors until that point and then failed on the parking.

What a con this test centre is

Absolutely terrible service the gentlemen that I had was so bad that he basically made me fail before I started my test by telling me and my instructor off before we actually got into the car. He was looking at me is if I was some type of inconvenience in the car and as I saw it I did nothing wrong and my instructor actually asked him and he couldn't give us an answer about what I did wrong. His name was L Dunkuey and honestly if I ever get him again I will refuse to sit the exam. What a disgrace of a person he really is...

extremely unfair that the whole system revolves around only passing a certain number of people within the test centre quota. I drove faultlessly for 40 minutes with 0 faults or minors, however my examiner gave me a major based on HIS OPINION that I pulled out 'dangerously' infront of a speeding white van when leaving the test centre when in fact all the instructors watching me said it would have been a minor at the most yet I fail even though he couldn't fault me on anything else. So I drove the whole rest of the test feeling happy with my drive yet he was sat there knowing I had failed within 20 seconds of 'driving' or even moving in the car . To make matters worse, he even kept me out longer than 40 minutes so I was late back and the fact no other faults were made, doesn't that show I am a safe driver? extremely unfair and the whole system needs reviewing.