Keep clear road markings are placed at areas on the highway to advise drivers to not stop or park within the two lines of the keep clear marking.

Other locations that they can be utilised are areas where pedestrians frequently cross a road, but where a pedestrian crossing has not been inaugurated.

Other road markings such as the white zig zag road markings use legislation to enforce no parking and certain yellow zig zag lines prohibit parking or stopping within the times shown on a sign. 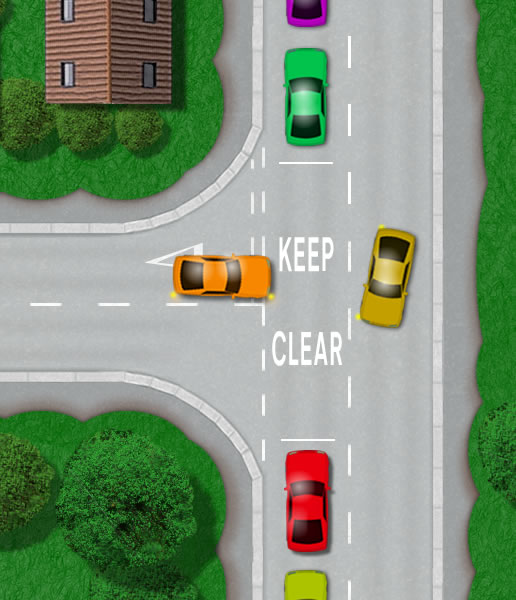 Although it’s not illegal to stop on keep clear road markings, the driving examiner expects a good level of common sense and consideration to other road users from a driving test candidate.

If during a driving test you stop on keep clear road markings, it really depends on the circumstances that will dictate whether the examiner will fail or pass you in this instance.

Try to avoid stopping in such areas by keeping a safe distance from the vehicle in front and by remaining vigilant for road markings. Granted, they can be difficult to see, especially if they are well worn and not clearly visible. The examiner will take this into account.

The circumstances and the ramifications will then become the deciding factor. Generally, if your actions impede another road user, it’s likely to fail your test. Or if for instance you stop in a keep clear area because you were driving too close to the vehicle in front, this alone may fail your test even if it has no effect on other vehicles.

Below are various other types of road marking that must be learn’t for the theory and driving test.