What are road traffic lanes? Traffic lanes are defined as a road which is wide enough to accommodate lanes of traffic traveling in the same direction.


Typically motorways, dual carriageways, urban roads and large roundabouts. To aid drivers in selecting the correct lane, signs and road lane markings are used. Many driving tests are failed each year due to inappropriate or potentially dangerous use of road lanes and traffic lanes.

This often occurs in lanes on the approach to junctions or roundabouts. This can be due to a test candidate not having any proper training, or a test candidate getting flustered and panics that results in a potentially dangerous situation.

The following can apply to road lanes at junctions, roundabouts and crossroads or may simply merge into another lane that may not reach a junction for some time. It’s important to always approach any of these by using the MSPSL driving routine. See driving routines for details.

The correct use of road lanes starts as far back as the eye can see and will often start by observing road signs. During the driving test, the driving examiner may often say ‘follow the signs to’ and so leaving it up to you to determine the correct lane. Independent driving on the test will also require that you read road signs and road markings to establish the correct lane.

Lane markings on the road surface

Getting closer to road lanes, you will often see road lane markings to help inform drivers which lanes they need. The markings may also be accompanied by the road name or destination. Before merging into a lane, unless continuing straight, use the Mirror Signal Manoeuvre (MSM) routine to inform other motorists where you intend on going.

The ahead, left and right arrows are self-explanatory. The ahead with a combined left or right arrow may divide into an ahead and left or right lane further down the road. A double-headed arrow is used where two different movements may be made from the same lane or where that lane divides into two or more lanes ahead. 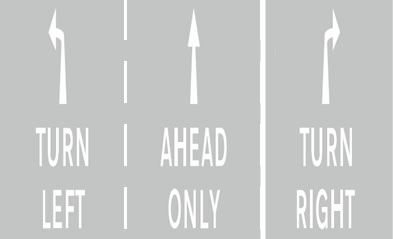 This is where many driving tests are failed due to panic. The examiner has told you to go in a certain direction and you find yourself going elsewhere. Whether you can change lanes or not depends entirely on the circumstances and road markings.

If it is legal to change lanes, you need to decide if it is safe to do so. See the changing lanes tutorial for further information, but generally speaking, only do so if it is legal and safe to do so. If in any doubt, remain in your current lane and the examiner will simply take you on an alternative route. Going in the wrong direction will not fail a driving test.

The same observation and approach technique (MSPSL) must be applied at roundabouts. Roundabouts may have a single lane or multiple lanes. Roundabout lanes are usually separated by broken lines allowing you to cross them if necessary, although they can occasionally be divided by solid lines making it illegal to move out of your lane into another.

Roundabout lanes can be stressful especially if busy. Do not attempt to change lanes if you are in doubt of safety. Changing lanes use of mirrors, signalling and often the blind spot before changing. For advice and tutorials on roundabouts, see: