Home How to Fail the Driving Test

How to Fail the Driving Test

Driving tests are often failed due to the learner having a lack of experience. A learner may be able to control a car well for example, but forgetting a mirror or observation at a crucial time can easily result in failing the driving test.


This section explains the top most common and frequent mistakes for failing the driving test so to allow you to practice and avoid them. Nerves also often play a big part in failing a practical test, so it’s a good idea to get as many hours as possible learning to drive so as you feel confident in your ability to pass.

If you don’t feel totally confident in your ability to pass, the chances are you wont.

Fail the driving test at junctions and crossroads

Much of this number one driving test fail evolves from not looking ahead and not thinking in advance.

By not looking ahead, many learners realise the junction is upon them too late. Test fails in this situation arise from inappropriate use of mirrors, signalling speed and position.


When on your driving test, look out for any types of indication of what may be ahead. Give way signs, roundabout signs for example. You may also see cars crossing in front of you up ahead which may signify a junction or a set of traffic lights. When you have spotted that there is a traffic system up ahead, talk yourself through the approaching procedure well before you get there. Mirrors, signal, position, speed and look (MSPSL). Slow down in plenty of time.

Approaching slowly will also enable you to stop just before the junction line if necessary as stopping over the line is often a common driving test fail.


Failing the driving test on Manoeuvres

The number two position goes to failing the driving test due to mounting the pavement, hitting the kerb (or curb as it’s known in other locations) abruptly or lack of all-round observation. The driving test will involve one manoeuvre which can be:

It is likely that you will only be asked to perform a reverse bay park if your chosen test centre has suitable parking bays or another test centre within driving distance in test the test time available has parking bays. The new driving test which includes forward bay parking makes use of local supermarket or hotel car parks. Manoeuvres are part of the driving test where you are the one that has complete control. It is important that the car is kept as slow as possible so as to keep complete control. All round constant observation is essential in case you need to stop for oncoming traffic or pedestrians. Manoeuvres need to be practiced so as you are completely confident with them. Complete and in-depth tutorials for all manoeuvres can be found in the Driving test tutorials section.


Fail the driving test due to Inadequate clearance

Fail the driving test Whilst Moving off from a stationary position 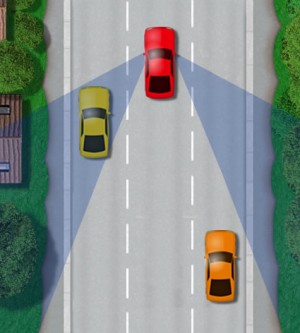 Blind spot is indicated by the blue shaded area. The red car’s driver can see the orange car through his rear view mirror and right mirror but cannot see the yellow car without turning to check his left blind spot.

This is a very common test failure as many learners seem to get confused as to what they should do. This often results in a test fail due to no indicating or inappropriate indicating or lack of appropriate observations (usually the blind spot).

The correct procedure for this is to get the car ready by selecting 1st gear and put your hand on the hand brake ready to release. Look for any approaching vehicles out your front windscreen, look for any approaching from the rear by looking into your rear view mirror, then check your right side mirror and finally check the right blind spot.

Wait till the vehicle has passed and go through the whole procedure again. Indicating at this time may cause the vehicle to alter their speed or course due to your indicating and may result in a test fail. Essentially, inappropriate of lack of signalling and not checking the blind spot is often the test fail in this case.


Fail the driving test – Use of speed

A significant disadvantage for most learners is lack of experience when it comes to speed. Typically during the driving test the examiner will take you around 30mph main city or town roads which in most cases are often wide and reasonably straight roads. The examiner will then take you on narrow residential areas that will have parked vehicles and other hazards.

A common test fail will be for a learner to not adjust the cars speed appropriately and drive slower. These areas although quieter are often more hazardous due to oncoming vehicles that may be difficult to pass due to parked vehicles. Or small and closed junctions that are difficult to see.

Another example is whilst on the test, driving on high speed A roads at 60 or 70 mph and then driving back into an urban environment which can be abruptly down to 30 mph again. On the other hand, nervous learners who drive too slowly on the test can be dangerous for vehicles behind as people tend to get impatient and try to over-take. Either extreme can easily fail the driving test.

Fail the driving test – Inappropriate use of mirrors or observation

It’s quite common to miss a mirror here and there during the driving test. Generally the odd mirror missed will just result in a minor or 2. It’s when it is essential to check the mirrors is when it counts. An example can be for when moving off from a stationary position or making a left turn soon after you have just passed a cyclist. Not checking the left mirror just before turning is dangerous for the cyclist and may result in an instant test fail.

Often another example of a test failure can be changing lanes. You may check your mirrors but failure to check the appropriate blind spot can also instantly fail you. If you’re not too great at looking in your mirrors, see keep forgetting to check mirrors for help.

Fail the driving test – Incorrect use of gears, clutch and steering

Towards the end of the list see’s the incorrect use of gears and steering. It is a bit of an old tale that you need to hold the steering wheel rigidly at the ten-to-two position of a clock. Generally, that is the best and most appropriate way but essentially, providing you have total control of the car and you keep your hands generally in that position, all should be good.

Problems arise for instance when you are turning sharply and let the wheel straighten up by letting it spin by itself. This can potentially lead to a loss of control so it is best to use the push and pull technique.

Incorrect use of gears can be for example to drive on a relatively straight road with few hazards in the incorrect gear. If it is a 30mph limit the gear should be the highest gear for that car that is most suitable for that speed. Often this is 4th or possibly 3rd gear.

Another typical incorrect use of gears when you stop at a junction for example and not selecting 1st gear when moving off and stall. This doesn’t usually result in a test fail unless you stall in a particularly hazardous place or are stalling frequently throughout the test.


Tips on how not to fail the driving test

If possible, look at the driving test in terms of individual sections that need to be achieved instead of a single complete accomplishment. 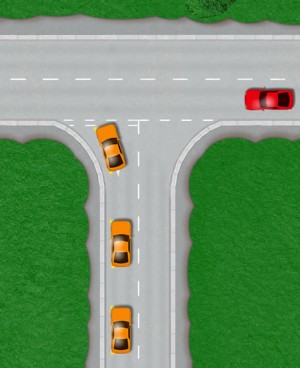 Open junction
This junction has no trees, bushes or houses blocking the view of the road that the driver of the orange car intends on joining. As a result, the driver has no need to stop at the junction if it is clear. When a junction is clear such as this, it is called ‘open’. 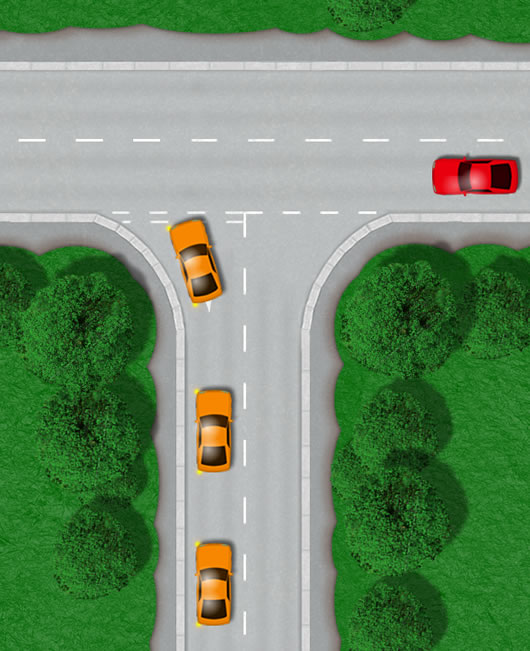 The driving test normally tends to find any weak points you may have. If you feel that you are still making some of the mistakes listed on this page, keep practicing until it is perfected. It will be cheaper in the long run to have a few extra lesson and pass the driving test first time than to fail.