Home When To Use Handbrake

When To Use Handbrake

The handbrake or parking brake as it is also referred to should be used at only certain occasions whilst learning to drive and during a driving test.

Using the handbrake when parking up

A driving test will involve the examiner asking you to park up on the left on more than one occasion. When you have stopped the car, apply the handbrake and select neutral.

General driving and the handbrake

Throughout a driving test there will be many occasions that the car will need to be stopped. For example this could be waiting behind other vehicles in traffic or stopping at a red light. 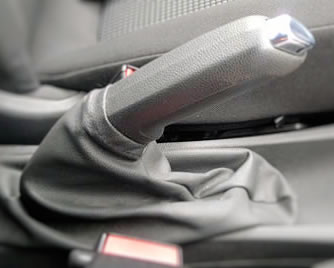 Try not to use the handbrake excessively during a driving test

The examiner will expect you to use the handbrake when stopping in such situations but try not desperately grab the handbrake the very moment you have stopped.

When you have come to a stop, wait 5 seconds or so and if it looks like you will remain stationary for a while, apply the handbrake. By doing this it will eliminate the possibility of you applying the handbrake too early whilst you are still moving, plus you may move off again quickly and so there was no need to use the handbrake anyway.

Manoeuvres and the handbrake

There is no rule for using the handbrake during manoeuvres, so this really depends on the situation. Roads often slope towards the pavement (camber) and if demonstrating a manoeuvre, it may prove beneficial to apply the handbrake to avoid rolling into the kerb.

These cambers can be steep and the use of the handbrake and the clutch biting point may help to prevent you rolling forwards or backwards and hitting the kerb. Similarly for the other manoeuvres, if you think using the handbrake will provide you with greater control, then use the handbrake.

Emergency stop and the handbrake

Hill starts and the handbrake

If your driving test is in an area where slopes and hills are present, it’s likely you will be making hill starts on your driving test. Hill starts demonstrate to the examiner that you have good and safe control of the car and that you will not allow the car to roll backwards when moving off. Use of the handbrake and the clutch biting point will eliminate and rolling.