When you take the driving test, it is rare that you have a clear or clean test report sheet at the end where zero minors, serious or dangerous faults are recorded. From August 2013 to August 2014, from 667,740 tests that were conducted, 6,534 passed first time with zero faults.


You certainly want to avoid any serious or dangerous mistakes as just one of these will be an immediate test failure. It is however highly likely that you will receive some, even many driving test minors (now called faults). You are permitted to receive up to 15 minors, 16 or more results in a test failure.

Three or more minors within the same category (all three minors for lack of mirror checks for example) may also result in a test failure. Too many repeat minors under the same category will convert into a serious fault, though how many minors required depends on the level of seriousness.

Starting from the top left of the driving test report, we shall explain the possible driving test minors, serious and dangerous faults that may occur. The boxes under ‘D’ are for dangerous, under ‘S’ is for serious and the boxes to the left of those are for minors and the total amount of minors in that section. 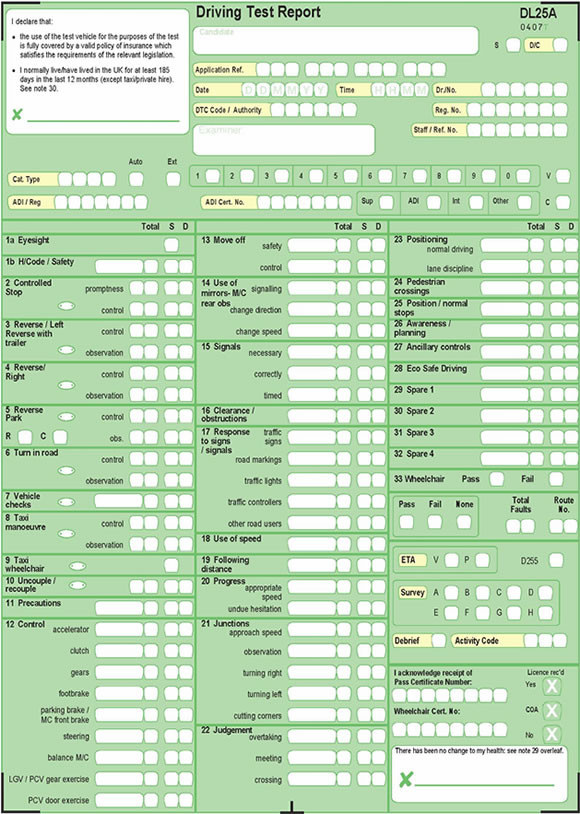 There are no minors that can occur due to the eyesight test. If you fail, the driving test will be terminated and you will lose your driving test fee. See driving test eye test for a complete guide.

This category is for specialist vehicle tests and not the car driving test.

The emergency stop promptness box accumulate minors by reacting to the examiners stop signal too slowly. The control box is control of the car, for example not to allow the car to skid.

Reverse with a trailer is a specialised test. The reverse left or Reverse round a corner is one of the more common manoeuvres. Typical test failures result from hitting abruptly the kerb or mounting the pavement (control) or lack of constant and appropriate all round observation (observation). Lightly brushing the kerb is likely to result in a driving test minor.

This manoeuvre is very rare on the standard driving test as it is more dangerous that the reverse left and is typically undertaken on the driving instructor part 2 test (ADI).

This can be either the reverse parallel park where again typical fails occur from loss of:

If Bay park, frequent test failure is due to:

The turn in the road needs to be completed slowly. Driving test minors, serious or dangerous faults often are to do with:

Commonly known as the Show Me Tell Me driving test questions, failure to answer 1 or all of these questions will result in just one driving test minor.

This is the turn in the road manoeuvre for taxi driver tests.

For taxi drivers to safely install wheelchair and occupant.

Trailer tests and uncoupling and recoupling the trailer.

When you sit your driving test, the precautions are to ensure that your seating is in the correct position so as you can reach all controls comfortably. On most occasions you will have driven to the test centre and therefore the seating will already be in the correct position. In this case, there will be no need to readjust.

This section covers the use of accelerator, clutch, gears, foot brake, parking brake, and steering. An excess of any of these minors above can lead to a test failure. Driving test minors often occur here due to:

Many driving test minors or test failure are the result of moving off incorrectly. Moving off can involve on a gradient, at an angle (parked closely to a car in front) or on a flat surface. Most common minors are:

14) Use of mirrors- M/C rear observation

General all round observations and using the mirror signal manoeuvre procedure. Many driving test minors occur on this on due to:

Many driving test minors and failure occur due to this issue:

Again, very many test minors and failure due to passing parked cars and cyclists too close.

17) Response to signs and signals

Most common driving test minors and failure in this section are:

Appropriate use of speed depends on the speed limit of that road and an appropriate speed for the road conditions. Weather also plays a part in this. Most driving test minors or failure in this section involve driving too fast for a particular road condition, for example parked cars. Generally speaking, if the road is safe and clear then drive at the speed limit. If there are obstructions such as parked cars then a slower speed may be required.

Frequent minor and failure can be due to joining a dual carriageway and remaining too close to the car in front. Remaining too close to cars in front generally or stopping to close to traffic in queues. This becomes significantly more important in wet or icy conditions. See 2 second rule for further information.

A vast number of driving test are failed at junctions and many minors occurred due to:

Most driving test minors or failure are due to not slowing down or stopping when a person is approaching or waiting at a pedestrian crossing.

This section involves parking up on the left where a safe and legal position should be taken. Most minors involve hitting or scraping the kerb. Mounting the pavement is an immediate test failure.

The ability to be aware of other road users including pedestrians and cyclists and to anticipate their moves. Common minors or failures for this involve a car indicating in front to turn off and not noticing till the last moment. Cyclists changing direction coming up to junctions and not anticipating oncoming vehicles along roads with many parked cars and the need to give way.

Highly unlikely to fail a driving test on this section and test minors are not too common. A driving test minor may occur due to frequently leaving the car in a low gear for too long before changing.